TORONTO — Travel trade associations from around the world came together yesterday to “link arms” and voice their support for travel agencies and small travel businesses in the midst of ongoing travel restrictions and requirements. 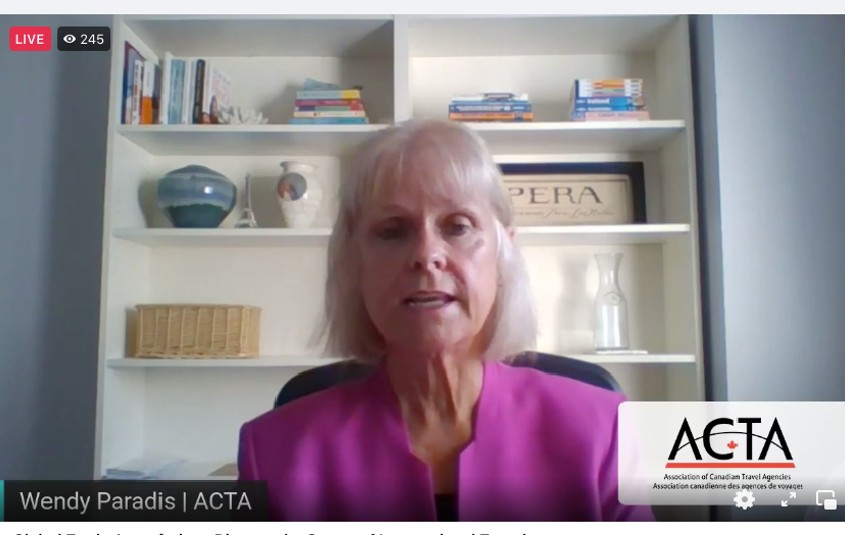 The panelists touched on key issues facing travel agencies and businesses today, including testing, vaccination, border closures and travel advisories, and called for standardized protocols that would safely and effectively resume global travel.

Speaking to the Canadian market specifically, ACTA’s Paradis highlighted the devastating impact the pandemic has had on travel agencies, with revenues down 90% compared to 2019 and more than 65% of full-time travel agents currently furloughed. Noting that Canada has had some of the strictest travel restrictions in the world, including a mandatory hotel quarantine that only lifted last month, Paradis said that bookings have picked up for winter 2022 however, there’s uncertainty over whether they’ll actually take place due to the rise of the Delta variant.

“The good news for Canada is that our vaccination rates are climbing and travel restrictions have started to ease. This means that many Canadians should and can travel in that they are very low risk,” she said. “However, we still have a blanket travel policy in place for Canadian travellers, which is to avoid all non-essential travel outside of the country, even though many Canadians are fully vaccinated. This needs to change.

“We are very hopeful for the future but until international travel restrictions resume, our industry cannot recover and our workers cannot return to work.”

ASTA’s Kerby was also in agreement, adding that similar restrictions are being placed on U.S. citizens.

“There have been 175 million citizens in the United States who have been vaccinated and right now, around the world, they’re being treated as though they’re unvaccinated and that they pose the same risk to foreign lands as those who are unvaccinated,” said Kerby. “That’s why we’re here today. We need more opacity from our governments, we need a clear message from each of us and we need to link arms so that we can actually speed the recovery of travel.”

“We cannot take on any more debt”

Calls for government assistance for travel businesses were made across the panel, including Paradis who noted that in Canada, travel agencies, for the most part, remain shuttered until international borders reopen and blanket travel restrictions ease.

“Between now and when that happens, we are in critical need of continued financial aid,” she said. “In Canada, most of these financial support programs are ending in October but clearly, it does not make sense to reduce any aid programs for hardest-hit sectors like travel agencies. Our industry is so in debt – we cannot take on any more debt. And so we are looking for grants and continuations of programs like the wage subsidy (CEWS) and the rent subsidy (CERS).”

Paradis also called the minimal financial aid for agents who operate as independent contractors “unacceptable,” and stressed the urgency for government support.

“We need to survive so that we can recover, and until we actually can move to recovery it is vital for the survival of this industry for these aid programs not only to continue, but to be enhanced over at least the next six months,” said Paradis.

Over in the U.K., inequity in financial aid has been an ongoing issue, said ABTA’s Graeme Buck, who noted that a hairdresser, for example, who has been able to reopen and resume business is able to access similar levels of government support to those who work in the travel sector, which is experiencing far more restrictions.

“We need recognition that different sectors are experiencing different realities and that we’ll need to receive different levels of support, the kind of which we’re seeing in Canada such as specific grant support for the travel sector,” said Buck. “We’ve had some resistance, it’s fair to say, from the U.K. government but we’re not going to stop fighting for it and we’re going to continue to make the case.”

“Canadians are not necessarily welcome around the world with mixed vaccines”

Though the majority of Canadians have rolled up their sleeves to get vaccinated (as of Sept. 3, 76.35% of Canadians 12 and older are fully vaccinated), those who’ve received mixed doses of COVID-19 vaccines and travelled abroad have reported various restrictions and, in some instances, have been outright denied entry. In Europe for example, many countries like Italy, Portugal and Poland do not recognized COVISHIELD, the Indian-made version of AstraZeneca, while several cruise lines including Princess, Celebrity, Carnival, Holland America and NCL have all announced mixed-dose restrictions.

This, says Paradis, is a significant issue in Canada in particular since at the advice of the National Advisory Committee on Immunization (NACI) and in an effort to speed up vaccinations across the country, millions of Canadians opted to receive a mixed-dose combination of COVID-19 vaccines. And yet there is currently no international consensus on vaccine mixing.

“One of our asks about government, and this ask happens every single day, is to follow the science and data when it comes to vaccine recognition and to work with their counterparts around the world to ensure that there is consistency,” said Paradis. “We are advised that this is happening. But as an industry we need to keep pushing so this remains, or even becomes a bigger issue for governments to want to solve.”

She noted that though the federal government keeps stating that the science is there, “Canadians are not necessarily welcome around the world with mixed vaccines.” Paradis is urging the global community to “get our act together” and to follow the science.

“I think that having some standard protocol based on science and data is really a key step forward,” she added. “Governments working together, being reasonable and not following public opinion but science instead – we need to take all that up to another level. As far as the travel industry goes, we’re in the middle of an election here and so we are asking every single travel advisor and travel owner in Canada – as voters – to understand that these are critical issues that need to be solved for Canadians to become mobile and for us to survive as an industry.”

When asked whether the demand for travel advisors has increased in Canada as a result of the pandemic, Paradis said that more than 30% of Canadians are more likely to ask a trusted advisor to book future travel. Looking ahead to winter 2022 and summer 2022, she noted that Canadians are mostly concerned about safety and are turning to advisors for clarity on safety protocols at the airport, on an airplane and in destination, as well as up-to-date COVID numbers and hospitalizations in destination.

“Using a professional travel agent is now seen more valuable than ever. We’re seeing that the number of questions and the number of contacts has actually gone up quite dramatically. So before the pandemic maybe they would speak to their client two or three times before they actually travelled, we’re now hearing from our travel agents that they’re talking to their clients 10-15 times and they’re not travelling until February.

“The interest in what’s going on with COVID and safety has increased dramatically and therefore a professional travel agent is being seen as one of the strongest supports in that.”