ORLANDO — It’s often said that the most modern hotels come with the biggest price points. Not so with Universal’s Aventura Hotel, which celebrates its grand opening today, Aug. 16, in Orlando.

As a Prime Value-category hotel, the contemporary 17-storey high-rise hits the same price point as Universal’s retro-inspired, family-friendly, 2,200-room Cabana Bay Beach Club, which at the time of its opening in 2014 was considered a game changer for its size and value. But with the opening of Aventura, Universal is now able to appeal to guests who prefer a more sophisticated setting at the same affordable rates, with standard rooms available for just over US$100 a night.

To highlight just how comparable in price and how different in design Aventura is from Cabana Bay, Universal invited Travelweek and other members of the media to a two-day preview of the new hotel prior to its official opening. While at a welcome reception, Russ Dagon, VP, Executive Project Director at Universal Studios Parks and Resorts, said the team is “very pleased with what we pulled off”, referencing a rooftop bar and a unique food hall among Aventura’s top amenities.

And this is just a “pause” in development for Universal, said Jonathan Tisch, chairman and CEO of Loews Hotels & Co., which owns and operates all of Universal’s on-site hotels in Orlando as part of a joint venture between the two companies. After experiencing “big bang” growth in rooms between 1998 and 2010, things were pretty quiet on the development front for a few years. But with Cabana Bay’s 2,200 rooms and Aventura’s 600 rooms, Universal’s inventory now sits at a healthy 6,200 rooms. 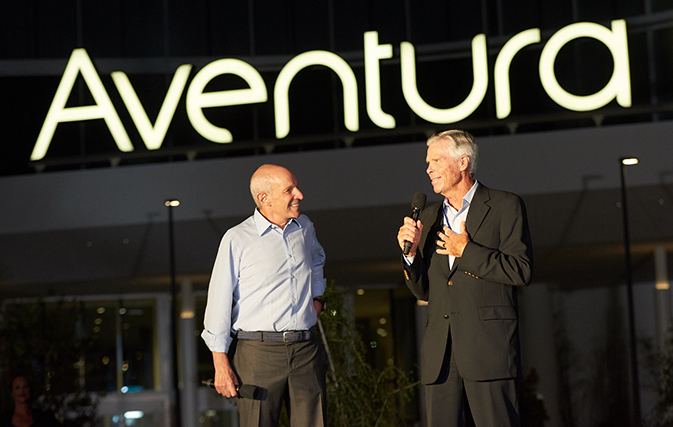 By the year 2020, following the opening of Universal’s Endless Summer Resort (comprised of two hotels: Surfside Inn and Suites in summer 2019, and Dockside Inn and Suites in 2020), featuring the lowest rates of any Universal hotel, the company will reach a total of 9,000 rooms. This represents a staggering growth of 275% since 2014.

“We spent a lot of time researching and understanding partnerships, and there’s no better partnership than the one between Loews and Universal,” said Tisch at a pre-opening ceremony on Aug. 15. On the new hotel’s appeal, Tisch added, “When you walk inside you’ll immediately get a feeling of something different. It’s a quality product with that price value orientation.”

1. It’s all about lifestyle. 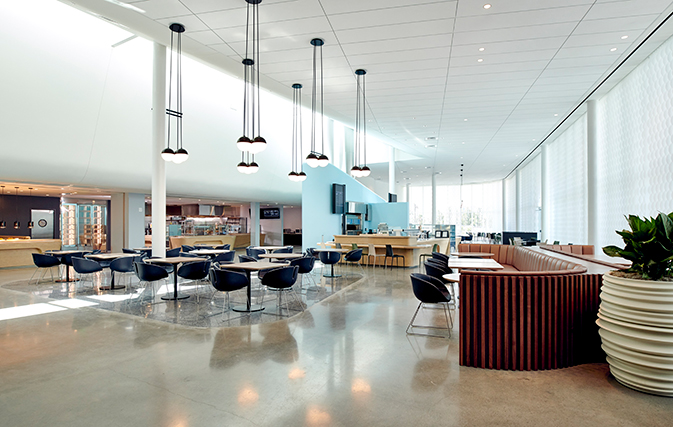 Speaking to Travelweek exclusively, Dagon said that agents should tell clients Universal’s Aventura Hotel is “everything guests are looking for in the sleekest, most contemporary way we can give to them.” He also notes that much of the hotel’s design is based on customer feedback.

“We asked, ‘What are our guests looking for?’ and we worked hard to give them that,” he said. “Its simple, sleek and clean.

For an ultra-modern hotel in the heart of Orlando, Universal’s Aventura Hotel is competitively priced. For a modern, on-site theme park hotel in Orlando? Its prices are downright hard to beat.

Of course, as a Prime Value-priced hotel, these rock-bottom rates come as no real surprise. In a four-tiered pricing system, Aventura currently sits on the lower end alongside Cabana Bay Beach Resort. The next level up is Preferred, which includes Loews Sapphire Falls, and then there are Loews Portofino Bay and Universal’s Hard Rock Hotel at the very top, both of which are designated Premier hotels.

So until the opening of Value-priced Universal’s Endless Summer Resort next year, whose standard rooms in value season will start at $75 per night and two-bedroom suites from $114 per night, Aventura is currently among Universal’s most affordable options.

According to Dagon, Aventura is Universal’s most urban hotel, and technology plays a big role in the overall guest experience. Every room comes with a tablet from which guests can order room service from and control everything from the air conditioning to the television. 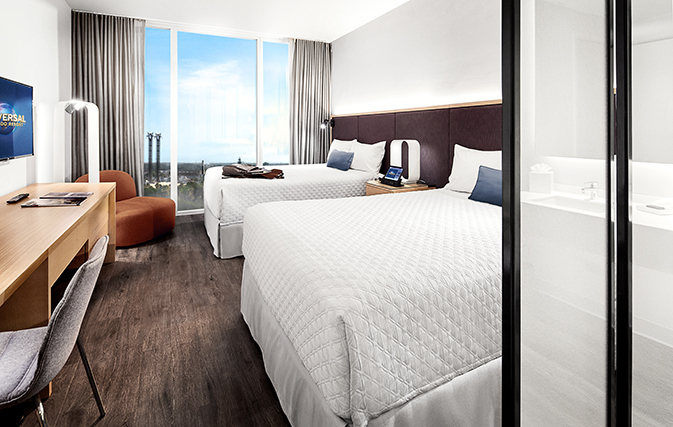 Like its exterior, Aventura’s interior décor is minimal and serene, with stark white walls and plenty of glass. Rooms come with incredible views, some of nearby Volcano Bay, courtesy of floor-to-ceiling windows. And if you think the guestrooms’ walls look a little bare, it was actually done by design; with the absence of wall art, the clean lines of rooms become more enhanced and the TV becomes its own imagery, said Dagon.

4. It’s still on campus and comes with all the perks.

Don’t let the major street that separates Aventura from Cabana Bay fool you; the new hotel is still situated on campus (the term commonly used to refer to the Universal Orlando Resort compound). As such, Aventura is within walking distance from Universal Orlando’s three theme parks (Universal Studios Florida, Universal’s Islands of Adventure, and Volcano Bay), as well as Universal CityWalk.

As an on-site property, the hotel offers guests the same perks as its sister hotels, like early theme park admission, complimentary shuttle bus transportation to theme parks and CityWalk, resort-wide charging privileges with their room keys, and complimentary delivery of merchandise purchased throughout the resort to the hotel.

5. It’s perfect for everyone.

Universal’s Aventura Hotel’s ultra-modern look and feel will surely win points among millennials and young couples. In addition to Bar 17, Bar Sol on the pool deck offers signature cocktails, plus there’s a fire pit next to a freeform, expansive pool and a Starbucks in the lobby. But just because the hotel is more contemporary than Universal’s other properties doesn’t mean families and kids won’t love it too. There are 13 kids suites in total, each featuring rooms separated by half walls to allow for privacy for both parents and kids. Plus there’s a virtual reality game room that teens will surely enjoy as well as a kids’ splash pad area. 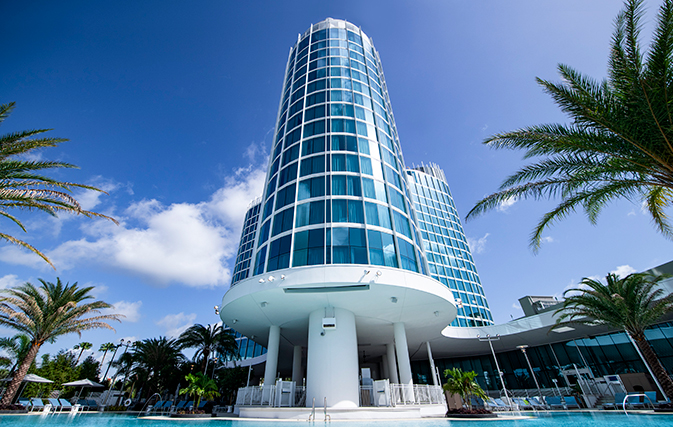