News Rail
Back to Rail Articles

QUEBEC CITY —  A new High Frequency Rail service has been announced for the Toronto-Quebec City corridor that will reduce travel times and offer a greener solution for commuters and travellers. 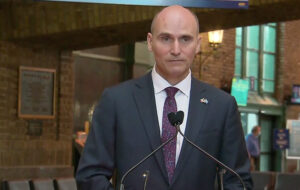 President of the Treasury Board Jean-Yves Duclos

The news was announced this morning at a press conference in Quebec City by Minister of Transport Omar Alghabra, and President of the Treasury Board Jean-Yves Duclos. They were also joined by Minister of Innovation, Science and Industry François-Philippe Champagne, Parliamentary Secretary to the Minister of Public Safety and Emergency Preparedness Joël Lightbound, Chief Executive Officer of the Canada Infrastructure Bank Ehren Cory, President and Chief Executive Officer of Via Rail Cynthia Garneau, and Mayor of Quebec Régis Labeaume.

The request for proposal for the procurement process is expected to launch in fall 2021. The dedicated passenger track is said to allow a travel speed up to 200 kilometres per hour, which could result in reduced travel times of up to 90 minutes on some routes, including Ottawa-Toronto. The High Frequency Rail could also nearly triple the number of annual trips taken by rail in the corridor, rising from 4.8 million in 2019 to a projected 17 million by 2059.

“Canadians deserve a fast and reliable train service,” said Minister Alghabra. “Today, we are taking the first steps in preparing for the procurement process to build a new train service in the Toronto to Quebec City Corridor. High Frequency Rail in the Toronto to Quebec City Corridor is a massive transportation project with the potential to transform passenger rail service by offering faster, more reliable, more frequent and cleaner transportation service.”

Duclos added: “Today’s announcement on the start of preliminary work and new resources for the Joint Project Office brings us one step closer to accomplishing this important project for our city and our region. In a few years, thousands of commuters will opt for this way of travelling, rather than by car or by plane, as it will be faster, more reliable, economical and environmentally sustainable.”

In addition to shorter travel times, the service will also result in more reliable on-time arrival performance up to 95% from a current average of 67%, as well as more direct routes with improved connectivity between cities and to other modes of transportation. It will also result in new services to certain communities such as Peterborough, Trois-Rivières and Laval, as well as new stations in targeted locations like Jean Lesage Airport.

Working with VIA Rail, the High Frequency Rail proposal would be the largest transportation infrastructure project seen by Canada in decades, which is why the Government of Canada is undertaking a phased approach to ensure the right conditions are put in place. Earlier this year as part of the 2021 budget, Ottawa announced its pledge of $491.2 million in funding over six years to VIA Rail Canada for infrastructure investments.