TORONTO — Porter Airlines normally gets about one-third of its revenue through the travel agent booking channel.

As the airline makes good on its just-announced expansion, “we expect that number could grow,” says Michael Deluce, President and CEO, Porter Airlines.

Announced earlier this week, Porter is planning to add up to 80 new jet aircraft to its fleet, opening up destinations in Western Canada and the U.S. West Coast from new gateways including Toronto’s Pearson Airport. There’s the potential for sun spots in Mexico and the Caribbean as well.

More destinations, more bookings, more industry partnerships … Porter’s flight plan for 2022 and beyond harkens back to the travel industry’s good old days pre-pandemic, when expansion was a matter of course.

You might think Porter’s big plans were already in the works when the pandemic struck.

Not so, says Deluce. “We considered a variety of growth plans over the years, but what we just announced was truly born from the pandemic.” 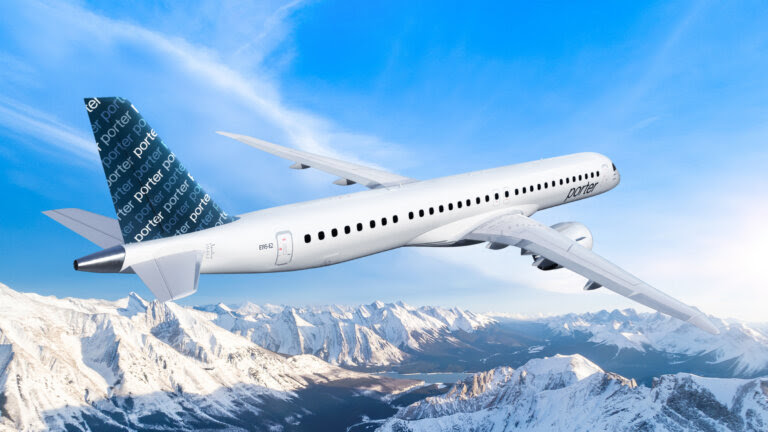 In a wide-ranging interview with Travelweek, Deluce talks about the cities Porter is looking at for its Western expansion, how Porter Escapes figures into the airline’s sun destination ambitions in the U.S., Mexico and the Caribbean, and why any talk of an oversaturated market – especially with all those low-cost carriers out there – are of no concern for Porter and its ‘flying refined’ strategy.

“We offer 4% for the Flexible/Freedom fare class and 5% on the Porter Pass product, which is a bundled package of one-way pre-paid flights. You can purchase 10 to 100 flights at a time, targeted to a route or region,” he adds.

Agents who are registered can login, or sign up if they’re new.

“Prior to the pandemic, travel agencies generated approximately one-third of our revenue. As we enter new major business markets throughout North America and begin expanding within the leisure segment, we expect that number could grow,” says Deluce.

Last month Porter Aviation Holdings Inc., Porter’s parent company, announced that it had reached an agreement with the federal government for loans valued at up to $270.5 million. Included in that amount is $20.5 million for passenger refunds for COVID-impacted flight cancellations.

Porter is gearing up to resume service on select domestic routes Sept. 8, and to select U.S. destinations on Sept. 17.

Porter’s flights started in 2006 and over the years the airline introduced service to U.S. sun destinations including Orlando, in 2015, and Myrtle Beach.

Now Porter is poised to widen its network even further, west and south.

The new Embraer E195-E2 jet aircraft joining Porter’s fleet starting in the second half of 2022 have transcontinental range, making them a game-changer for the airline. Porter will offer flights from Pearson Airport for the first time, however flights from Porter’s existing hub at downtown Toronto’s Billy Bishop Airport remain core to its business and will continue with high-frequency regional service on turboprop aircraft, as the company confirmed earlier this week.

Porter’s $5.82 billion investment includes 30 firm commitments and 50 purchase right options. Included in the agreement is the ability to convert purchase rights to smaller E190-E2s. Porter has said this provides opportunities to introduce nonstop service in markets where connecting flights are often the only option, and also enables higher-frequency service for routes with greater demand.

We asked Deluce what cities Porter is looking at in Western Canada.

“We’ll introduce specific routes next year, but large cities west of Ontario are on our radar – places like Winnipeg, Regina, Saskatoon, Edmonton, Calgary and Vancouver,” he said.

“Our plan is to connect them in the east with a combination of Toronto Pearson, Ottawa, Montreal and Halifax. Obviously this will take time to fully realize, but there has been a lot of interest in Western Canada for Porter service over the last 15 years. Now we can finally start providing it.”

Were plans for Porter’s expansion already underway when the pandemic hit? “We considered a variety of growth plans over the years, but what we just announced was truly born from the pandemic,” says Deluce. “It created the conditions in many ways for us to take this step. Even though it has been a very tough time for the entire travel industry, this is an incredible opportunity for us to serve all of North America with as many as 80 new Embraer E195-E2 aircraft.”

The airline industry has been decimated by COVID-19. But with the end of the pandemic in sight, airlines have been reinstating routes and in some cases, even working on expanding their networks.

Air Canada, Transat, Sunwing and WestJet, along with low-cost carriers and ultra low-cost carriers including Air Canada Rouge, Swoop and Flair Airlines (with expansion plans of its own: 50 aircraft in 5 years) all make for heady competition in a market like Canada.

That’s especially true to sun destinations, where overcapacity has been an issue off and on over the years.

Is Porter looking to win new markets with its refined take on flying, while the ULCCs battle it out on price alone? And could travellers be too price-focused after the ups and downs of pandemic to make that strategy work?

Says Deluce: “Anyone who knows Porter or has flown with us understands that our brand is different than any other carrier in North America. We have a strong emphasis on service and the onboard product is unique, with details like complimentary beer and wine served in real glassware. This isn’t defined by where you sit on the plane or the type of ticket you buy – everyone gets the same treatment. People were amazed by this when we introduced it for one-hour flights because no one else was doing it. The free beer and wine will continue, but we want to build on this and offer something that truly stands out for longer flights. We’re focused on developing this over the coming months, ahead of these flights starting in the second half of 2022.

“Based on our experience, fares naturally come down when Porter enters markets because of competition. We’ll always be competitive with pricing, but our focus is on providing customers with real value. A lot of people appreciate this and there is definitely a distinct market for it. We’re confident that our superior passenger experience, combined with competitive pricing, will continue attracting leisure and business passengers as we carve out our place in the wider North American market.”

Porter says its first set of new routes will be finalized and announced ahead of its new aircraft deliveries, scheduled to begin in mid-2022.

Potential new U.S. sun destinations on Porter’s map include Tampa, Ft. Myers, Miami, Ft. Lauderdale, West Palm Beach, L.A. and Las Vegas. While Porter has confirmed that it has its eye on Mexico and the Caribbean, so far the only potential sun spot on the map that’s outside of the U.S. is Nassau, suggesting that Mexico and Caribbean destinations will be added in later stages of the expansion.

We asked Deluce if Porter is eyeing more mass volume favourites, or off-the-beaten-track gems, or a mix.

“Destinations are a work in progress,” he says. “We’ll definitely want to be in certain popular places, like Florida, but we’ve also opened up interesting locations in our existing network that had little to no commercial air service previously. Muskoka and Mont Tremblant are great examples of this. So, it will probably be a mix of both as the route map fills out.”

“Porter Escapes offers packages for almost every destination that we serve today, including hotels and attractions,” says Deluce.

“That will continue with new routes as they are introduced with the jet fleet, so that division has significant growth potential.”