Universal Orlando Resort has announced that it is building a fourth theme park to be called Universal’s Epic Universe.

Featuring an entertainment centre, hotels, shops, restaurants and more, the park will be located within a larger 750-acre site that nearly doubles Universal’s total available acreage in Central Florida. Its specific location will be just a few miles from the existing resort in Southwest Orange County, south of Sand Lake Road and east of Universal Boulevard.

An opening date has yet to be revealed.

“Our new park represents the single-largest investment Comcast NBCUniversal has made in its theme park business and in Florida overall,” said Roberts, Chairman and Chief Executive Officer of Comcast Corporation. “It reflects the tremendous excitement we have for the future of our theme park business and for our entire company’s future in Florida.”

Williams, Chairman and Chief Executive Officer for Universal Parks & Resorts, added: “Our vision for Epic Universe is historic. It will build on everything we have done and become the most immersive and innovative theme park we have ever created. It is an investment in our business, our industry, our team members and our community.” 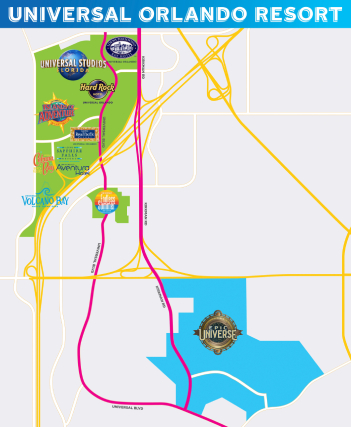 Mayor Demings spotlighted Universal’s role in the Kirkman Road extension, a 50/50 public-private project that when finished will add a 1.7-mile, north-south artery between Carrier Drive on the north to Universal Boulevard on the south. Universal is investing US$160 million to extend Kirkman into the area where the new park will be located.

“The investment Universal is making in our community and the benefit all of us will see is substantial,” said Demings. “This will benefit nearly every segment of our economy, from tourism to high-tech.”

Demings added that the Kirkman extension will improve transportation and open up the entire area for additional development, including an important expansion of the Convention Center.

Construction of the new park alone will contribute a total of $11.5 billion in direct and indirect economic benefit into the Florida economy. Universal Orlando currently employs 25,000 people and will hire an additional 14,000 team members as part of Epic Universe.

Universal already operates Universal Studios and Islands of Adventure, as well as the Volcano Bay water park, in Orlando. The company recently has been acquiring hundreds of acres of land near Orlando’s convention centre.

Universal’s announcement comes weeks ahead of the planned opening of a Star Wars land at rival Walt Disney World. An identical land opened earlier this summer at sister park Disneyland in California.

Earlier this summer, Universal also debuted a new ride based on the Harry Potter property, which had fans waiting for hours to ride it.

More details about Epic Universe will be revealed over time.