TORONTO — Transport Minister Omar Alghabra said yesterday that while plans are in the works for travel’s restart, there’s still no word on timelines, because so much depends on public health directives.

Yesterday also brought a rare benchmark from Prime Minister Justin Trudeau, who during his COVID-19 briefing said that 75 – 80% of Canadians would need to have received at least one dose of COVID-19 vaccine before public health measures could potentially be eased, without going into further details.

Meanwhile the Canadian travel industry is heading into its 15th month with travel at a virtual standstill, and with lifeline financial aid programs including CEWS and CRB soon starting to wind down. All this as the UK, the EU and others have delivered plans for reopening, prompting calls from Air Canada, the NACC and others for a reopening plan here.

Travelweek asked travel retailers and suppliers, is it enough that the federal government is essentially saying ‘we’re working on it’ without offering up a reopening plan with multiple, quantifiable benchmarks and targets?

“It is absolutely not enough to say ‘we are working on it’. The issue here is not the ‘work being done on it’ but the utter lack of transparency,” says Brett Walker, GM, Collette (Canada).

“I UNDERSTAND THE ANXIETY AND THE SENSE OF URGENCY”: ALGHABRA 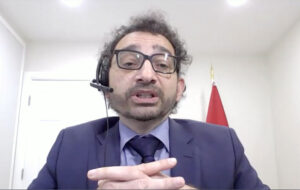 Minister Alghabra’s comments came during a Q&A session yesterday following his announcement that Canada’s airports will receive some $740 million in funding amid the pandemic.

“The work on restarting the travel sector has started, it’s ongoing as we speak,” he said, adding that the restart will be safe, and gradual. With so much depending on guidelines from the Public Health Agency of Canada, “I can’t give you a time,” Alghabra said. “But we’re doing all the prepatory work for that.”

Later he said: “I know it’s frustrating for many industry players and operators. I understand the anxiety and the sense of urgency. We want to restart. The challenge remains the timing. All I can say is, these measures are temporary. We’re going to see a gradual easing of these measures.”

Canada’s advisory against non-essential travel and 14-day quarantine rule, and the closure of the Canada-U.S. border, have been in place since the pandemic began in March 2020. PCR tests, both pre- and post-arrival, were announced in December 2020. In late January 2021 Canada’s major airlines halted all sun flights, and the 3-day hotel quarantine requirement came into effect in mid-February 2021.

Last week, in a statement issued after G7 Transport Ministers’ Meeting, Minister Alghabra confirmed that a coordinated approach for COVID-19 testing and a system of vaccination certificates will be at the heart of the travel restart plan from the G7 countries, including Canada.

“We are turning a massive corner,” Alghabra said yesterday, speaking of Canada’s vaccination rollout, with 40% of Canadians now with at least one dose and with the country on track to meet its September 2021 timeline for full vaccinations. “I feel very optimistic about the restart. But timing remains hard to predict, and I don’t want to raise anyone’s expectations. We want to have the right timing and the right measures in place” before restrictions lift, he said.

Minister Alghabra also spoke about the federal government’s financial assistance packages for Air Canada, announced April 12, and Transat, announced April 29. The deals with Air Canada and Transat were good news on many fronts, including for travel agents: “We ensured that travel agents don’t have to pay back their commissions.” He also confirmed yesterday that talks with other industry stakeholders, including airlines, are ongoing: “We’re in the midst of discussions with other airlines.”

“THERE ARE MOMENTS WHEN ESSENTIAL TRAVEL IS NECESSARY”: TRUDEAU

Also yesterday, Prime Minister Trudeau said in his COVID-19 briefing that a ‘one-dose summer’ could at least allow for some easing of restrictions here at home, and that if all goes well, a ‘two-dose fall’ could bring Canada even closer to normal life.

And to get a ‘one-dose summer’, two things have to happen: “Cases need to go way down, and at least 75% of Canadians need to have had their first dose.” Trudeau had been asked about reopening plans in the wake of Saskatchewan’s recently released reopening plan.

Last week Trudeau said “perhaps this summer if everything goes well”, in his response about Canadians travelling, however there was no indication if that was internationally or just within Canada.

Yesterday Trudeau was also asked about his own plans for attending the upcoming G7 Leaders’ Summit in the UK next month, and whether or not his travelling to the UK, and Minister Garneau’s recent trip, with Canada’s advisory against non-essential travel still in place makes for a mixed message for Canadians.

He also said all quarantine protocols would be followed “because no one is exempt.”

We asked travel retailers and wholesalers for their reaction to Canada’s 14 month long and counting travel shutdown, and the lack of transparency on the government’s plans.

“Whatever the reason might be, it’s no reason at all! Governments will ultimately be judged by what we know of the present – at some point in the future. That’s their fate, but unfortunately our industry’s fate is right now, and it rests entirely on two things – a plan and the plan’s transparency,” said Collette’s Walker.

Walker adds: “The UK and other countries have bolstered support for reopening by, first and foremost, ensuring economic, social or more generally public policies will enliven public health. That being  sacrosanct, they’ve engaged stakeholders, fostered transparency and provided data to achieve the highest possible consensus and dare I say political outcomes.

“We all know the road ahead may take many turns. If there is any certainty at all – it’s that the road WILL take many turns! This industry understands better than most how to manage uncertainty when there is the means to do so. A turn here and a turn there. No plan is perfect – far from it. But no plan at all is wholly imperfect.

“Failing to plan is planning to fail. It’s the same whether one chooses not to plan or that right is taken away. If we can’t plan for ourselves then, at the very least, we need the government to provide us with one. It’s been 14 months since borders closed and for the government to say they ‘are working on it’ is anything but helpful. It’s woefully inadequate and it’s shameful.

“For the thousandth millionth time – give us a plan!” said Walker.

Robert Townshend, President, Total Advantage Travel & Tours, agrees. “‘We’re working on it’ isn’t good enough. We’ve been hearing that for over a year. So many other countries worldwide have their reopening plans in place. What is taking us so long to come up with a plan? The industry has been hit so hard, we need something to look forward to. Even if the plan is that we will reopen when the numbers get to a certain level then at least we know where we are headed and we have a target in our minds that has to be met.”

Townshend adds: “I’ve had enough of all the vagueness that the government has been giving us regarding opening up. We need a clear strategy of how Canada intends to move forward.”

“We have had 15 months if not more to put forward a plan for opening the borders, quarantine, three-day hotel stays, etc… Unfortunately every time we put one step forward with the government, they then go 10 steps back,” Gedeon tells Travelweek.

“Our industry has been sitting in the dark for too long, 15 months, and it is taking its toll on agents, agency owners, tour operators. It is critical that the government shares with us the details of their plan with timelines.

“We need them to show us that there is a light at the end of this very dark tunnel.”