TORONTO — About 35% of airline tickets and 15% of tour operator bookings impacted by the COVID-19 pandemic have already triggered commission recalls.

But the lion’s share of potential recalls, from a total amount typically pegged at $200 million, is still facing travel agents as the retail sector waits to hear if the federal government’s airline industry bailout will include any form of commission recall protection.

ACTA’s webinar came just before Prime Minister Justin Trudeau announced today, March 3, that CEWS and CERS would both be extended through June 5, 2021. The amount of support would “remain consistent,” said Trudeau today.

Asked if she thinks the government will allow sun destination flights, so far suspended until April 30, to resume on May 1, Pierce answered with an emphatic “I hope so.” But she’s realistic about the path to that goal. “They keep moving the horizon line further and further,” she said. “I think we have to remain optimistic. But I’m also realistic. I know we’re not really in control of that, and that’s why having a path forward is so important.”

Airlines need extra runway to restart operations and get bookings coming in, she added. “As [former president and CEO] Calin [Rovinescu] used to say, ‘We’re not a pizzeria. It takes us a little longer to get going.’”

Pierce offered a handy outline of the government’s entry and quarantine requirements currently in place. 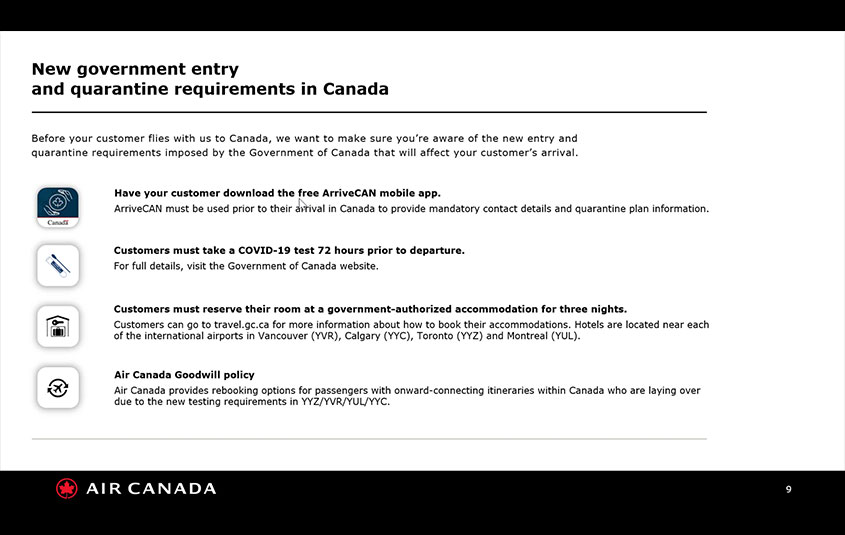 Pierce also highlighted recent wins and challenges ahead. The airline’s resumption of Boeing 737 MAX service is good news, she said, as the planes marked their first month back in service earlier this week, after a hiatus of two years. “This is a clear example of actually overcoming a crisis,” said Pierce, emphasizing that challenges can be conquered in spite of hurdles.

WHAT ACTA IS ASKING FROM THE GOVERNMENT

Craig-Peddie says ACTA is “very encouraged by discussions with the federal government” around the airline bailout. ACTA has indicated in recent weeks that talks with the government have progressed from ‘if’ commissions will be protected, to ‘how’. And last month a report in the Globe and Mail suggested bailout talks, now in the hands of the Ministry of Finance, were in the home stretch.

Feedback sent to Travelweek last month from the Office of the Deputy Prime Minister and Minister of Finance, underscored that positive news. 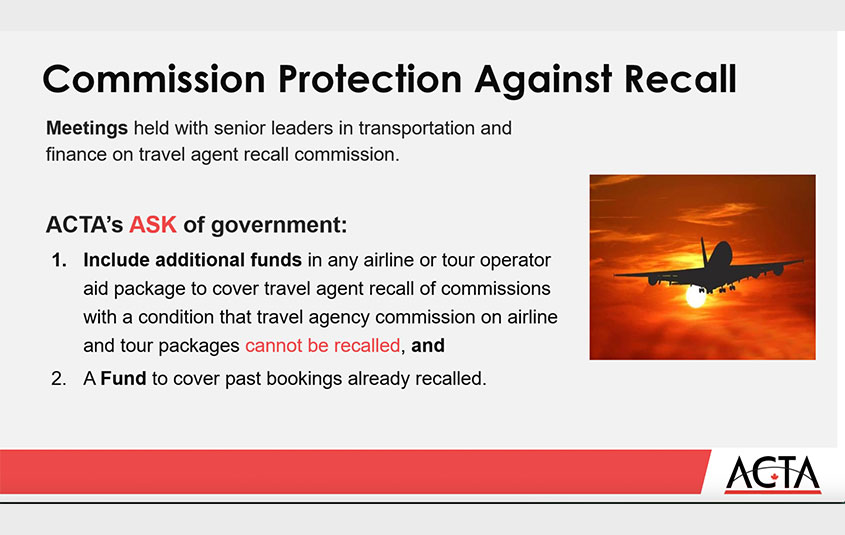 In yesterday’s webinar, Paradis said ACTA’s ask on the commission recall situation is this: that any federal government bailout of the airline industry include additional funds to cover recalled travel agent commissions, with a condition that travel agency commission on airline and tour packages can’t be recalled; and a fund to cover past bookings already recalled.

ACTA was pleased with the extension of CRB and EI, however more help is needed.

For CRB and EI, Paradis says ACTA is lobbying for an extension to the end of September 2021, or 90 days after travel restrictions are eased.

For CEWS, ACTA is also lobbying for 85% to the end of September, of 90 days after travel restrictions are eased, with limited conditions, and the base and top-up subsidy calculation to be based on the year-to-date revenue comparison to 2019.

For CERS, ACTA is also lobbying for 90% to the end of September, of 90 days after travel restrictions are eased, retroactive to April 2020 and remove the $300,000 overall cap.

Paradis also noted that the HASCAP loan program for hardest-hit businesses, including those in travel and tourism, launched Feb. 1. Feedback from agents about the HASCAP program is urgently needed, she adds, as ACTA is working with the government one-on-one on this issue.

For restarting travel post-pandemic, Paradis said that in the first two months of 2021 the federal government was “not open to any sort of discussion about restarting the travel and tourism industry.”

The rocky start to 2021 included the 72-hour PCR test requirement announced at the end of December 2020, followed by the suspension of winter sun flights announced Jan. 29, and the hotel quarantine measures.

Vaccines are now rolling out, however slowly, making this a better time to renew discussions, said Paradis.

ACTA’s advocacy work is bolstered by on-the-ground efforts from individual travel agents. “If you have not reached out to your MP, we encourage you to do so,” said Craig-Peddie. If agents would prefer to join in with a group organizing Zoom calls and the like to get the message out to MPs, Craig-Peddie invites agents to email memberservices@acta.ca to link up with one of those groups.

Paradis and Craig-Peddie also urged agents to join ACTA if they’re not already members. The link is acta.ca/membership.