Turkey in recovery mode, looks for 50 million visitors by 2023

NEW YORK — The new Minister of Culture and Tourism of Turkey has set a target of 50 million international visitors to Turkey by 2023. 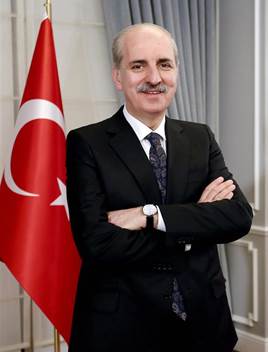 The Hon. Professor Dr. Numan Kurtulmus, speaking in New York City about his strategic vision for increasing travel and tourism as the engine for improving relationships between countries and cultures, said tourism to Turkey has started to recover.

While the 50 million visitors goal is expected to generate US$50 billion in economic impact, Kurtulmus said the most valuable result of increasing tourism is forming the foundation for a stronger global community through the better sharing of ideas and values between cultures.

“Few countries have as wide a variety of tourism and cultural attractions as Turkey, including – and, perhaps most importantly – its figurative and physical position as a bridge between East and West that embraces visitors from across the globe,” he said.

More news:  A look at COVID 19 travel restrictions across Canada

“We see this strength as vital to our vision for bringing communities together, and we will invest heavily in public and private partnerships to ensure we are developing these tourism products to diversify our markets and audiences.”

Turkey has already made progress towards its goals this year, with tourism to the country up 14.05% during the first six months of 2017, and up by 36.53% in June this year compared to June 2016.

The country’s tourism assets are also being recognized in 2017 with the UNESCO World Heritage Committee adding the Ancient Ruins of Aphrodisias to the World Heritage List in 2017, The New York Times’ naming the remote Aegean island of Bozcaada as one of its ‘Top 52 Places to Visit’ this year, and Newsweek naming the 13th Istanbul Biennial on of the world’s top five exhibitions worth travelling for.

“Turkey is one of the most diverse destinations in the world, with a richness of history, archeology, gastronomy and geography from the Mediterranean to the Black Sea, combined with art and culture that spans the ages yet is at the forefront modern innovation,” Kurtulmus said.

“I invite travellers from all over the world to discover the beauty of our country, whether the new UNESCO World Heritage site Aphrodisias, or the remote island of Bozcaada … with so many varied characteristics, combined with Turkey’s history of hospitality from millennia of civilizations making the land their home, we have the potential to enrich our global community through cultural diplomacy.”

Most popular
SUPPLIER COVID-19 UPDATES: Airlines, cruise, hotels & tour ops
REOPENED: The latest list of reopened destinations
A look at COVID 19 travel restrictions across Canada
Canada fails to make the UK’s new green-light list
Up in the air: How to fly now in Canada
Carnival’s Mardi Gras won’t sail until February 2021; notifications going out to agents today
UIA to resume Toronto service on July 19
Belize to reopen airport on Aug. 15, here’s what you need to know
Canadians among the list of permitted visitors to Curaçao