Travel agents “are an integral part of our success”: KLM celebrates 100 years

TORONTO — KLM’s history with travel agents doesn’t go back quite as far as the company’s founding in 1919, or its first flight in 1920. But the trade is immensely important to KLM nevertheless, with travel agents still providing the majority of bookings for the airline. “If we don’t have travel agents, we don’t have bookings,” says Bas Gerressen, Senior Vice President North America for Air France – KLM.

In Toronto with several other members of the Air France – KLM team today, Gerressen said travel agents “are an integral part of our success.”

On Oct. 7 KLM marked its 100th anniversary, an incredible accomplishment in an increasingly competitive field. Dutch entrepreneur Albert Plesman along with several other partners founded the company in 1919, and earlier this week KLM celebrated its centennial with a global event in Amsterdam.

Here in Toronto, Air France – KLM executives hosted a press conference and lunch at the Artscape Daniels event space to mark the occasion. 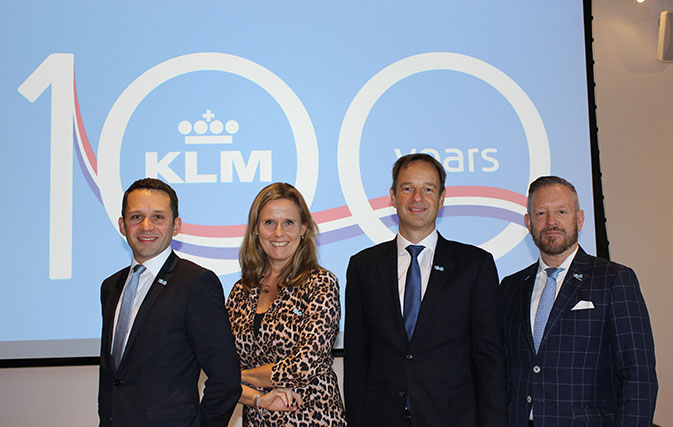 “Albert Plesman had a dream. He said ‘The ocean of the air connects us all’,” said Barbara van Koppen, SVP Corporate Center & General Counsel for KLM. “His dream has come true.”

KLM’s history in Canada dates back to 1949, when KLM’s first Montreal flight arrived from Amsterdam – after two stopovers.

“We have very close ties to Canada,” said van Koppen.

KLM was “away from the market” for a while, back when its presence in Canada was more known for its partnership with Northwest Airlines. “But we’ve been back since 2005 and we’re very happy to be back.” 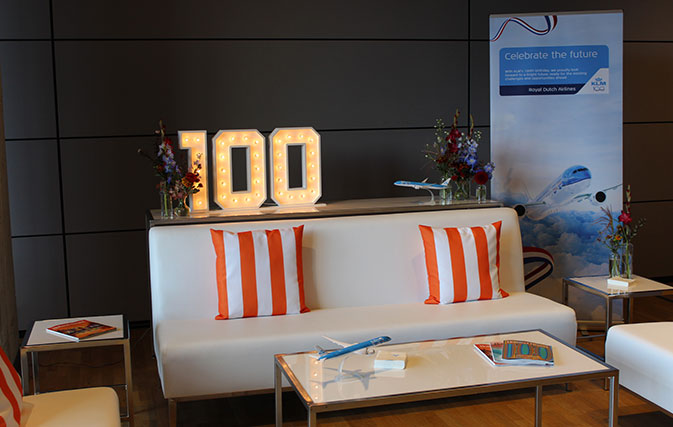 Even as it marks its first 100 years, KLM wants to make sure that it, and the planet, are around for many more. Sustainability has been a core focus for the airline for a long time and that commitment has ramped up in recent years. The airline has a Fly Responsibly campaign and also has a Carbon Reduction Roadmap. The company’s current goal is to reduce the CO₂ per passenger with 20% by 2020 (in comparison to 2011). The airline is on track: by the end of 2018, it had already reduced its carbon emissions by 17%. By 2030, the company is aiming for a reduction of 15% of its total CO₂ footprint, compared to 2005.

“It’s our commitment to take a leading role in making air travel more sustainable,” said van Koppen. “We have a responsibility to keep the planet livable for future generations.”

Air France – KLM must balance its sustainability goals with its customer service goals. Both are high. “We want to put customers first. It’s in our DNA,” says Vincent Etchebehere, VP and Director General of Air France – KLM in Canada. The company operates from five gateways in Canada and has the distinction of being the most punctual airline from Canada to Europe.

Like any airline, it’s also looking to grow and expand. “We are at the limit in terms of capacity at Schipol,” says van Koppen. “There’s the idea that you have to earn your growth. And to invest in sustainability means you also have to invest in your company.”

Schipol needs more space for more capacity. “If we are not competitive anymore, then we cannot invest anymore in our fleet, our assets and in our customer.”

Gerressen says Air France – KLM is looking to add Virgin Atlantic to its transatlantic venture, and then will look to further ties with Alitalia. WestJet, already a partner, could be next, he said.