SAN DIEGO — A little kindness goes a long way, as one little boy and his parents have learned following a United Airlines flight.

Braysen, a four-year-old boy with autism, was on flight UA2210 from San Diego to Houston with his parents when he became agitated just prior to takeoff. Speaking with CNN, his mother, Lori Gabriel of Cypress, Texas, said that Braysen removed his seat belt, saying he wished to sit on the floor. 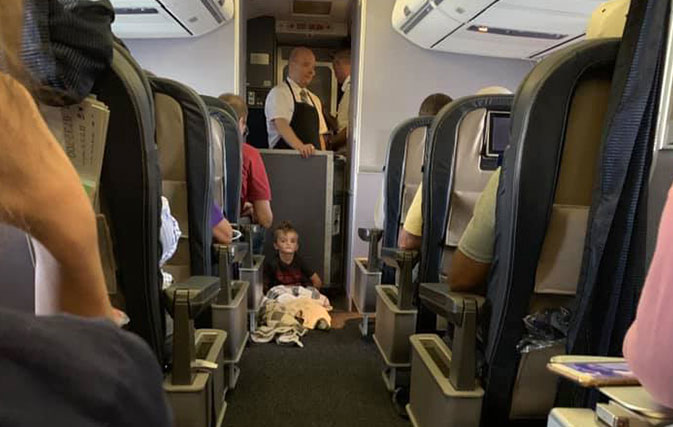 Both Gabriel and the boy’s father tried to restrain him and get his seat belt back on but it was “impossible”, said Gabriel, as Braysen had started kicking, hitting and screaming.

A flight attendant then informed them that the flight would not be able to take off until Braysen was seated.

“I told her the boy has autism, we’re trying, give us a minute,” said Gabriel.

The flight attendant returned with two other attendants and asked Gabriel how they could help. What transpired next is nothing short of inspiring.

The crew allowed Braysen to sit on Gabriel’s lap for takeoff while his father held him. After takeoff, they let Braysen sit on the floor next to them after Gabriel said the vibration of the plane helps to calm him down.

While on the floor, the boy accidentally kicked a nearby passenger, an off-duty United Airlines’ flight attendant. But rather than getting upset, the passenger “said it was okay if he kicks her feet,” said Gabriel.

The crew then moved Braysen to first class where he proceeded to kick another passenger’s seat. Gabriel apologized to the man but he, too, wasn’t bothered at all.

“He introduced himself to Braysen and give him high fives,” said Gabriel. “He said ‘he can kick my chair, I don’t care.’”

The entire cabin followed the man’s lead by showing Braysen pictures on their phonesm while the flight attendants ensured Gabriel and the boy’s father had everything they needed.

Just before disembarking the plane, the off-duty flight attendant handed Gabriel a note to commend her for her strength. 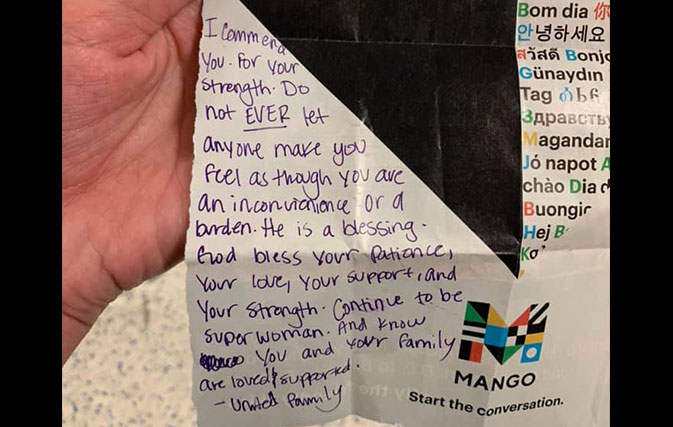 “Do not ever let anyone make you feel as though you are an inconvenience or a burden. He is a blessing,” the note read. “God bless your patience, your love, your support, and your strength. Continue to be a superwoman. And know you and your family are loved and supported.”

She signed the note, “United family.”

After posting a picture of the note on Facebook and thanking all those onboard who helped out, the airline replied to Gabriel via a tweet, saying: “We are happy that our crew was able to make it an enjoyable experience. We are overjoyed to see that we have such loving and supportive passengers on board as well! We look forward to seeing Braysen again soon!” 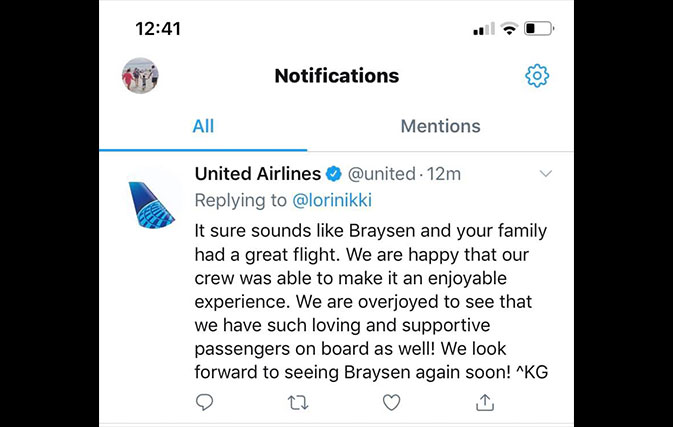 Gabriel’s story quickly went viral, with many people adding their support. Luca Jellinek wrote, “All the best to this family and as for United…I am awed.”

Keith Pence added: “We have a 9 yo son with ASD, ADHD and SPD. I get it! Good on the crew to help out as opposed to judging.”

Even the off-duty flight attendant, Camille Vaughn, who wrote the note commented on Gabriel’s post, writing: “Blessed to have met your family and made a difference.”

Gabriel, who quickly realized that Vaughn was the one who originally wrote the note, replied: “Thank you so much u don’t understand how you made my family feel!! You have made a huge difference for us with one simply note, I cannot thank you enough.”