Grand Bahama back on stream: The Bahamas is open for business

TORONTO — Not many people know that there’s another Lady Di living and working in The Bahamas, not royal by any means like the British princess, but just as loved and revered by her country.

As one of Eleuthera’s finest pineapple farmers, Mrs. Diane Thompson, affectionately known on the island as Lady Di, is considered a national treasure, both for her 40-plus-year career and her infectiously sunny outlook on life. Despite losing her husband last year and the backbreaking work that comes with running a successful farm, Thompson never considered giving it up, working long hours to plant the stalks, turn the soil and make the jams and chutney with help from her son. 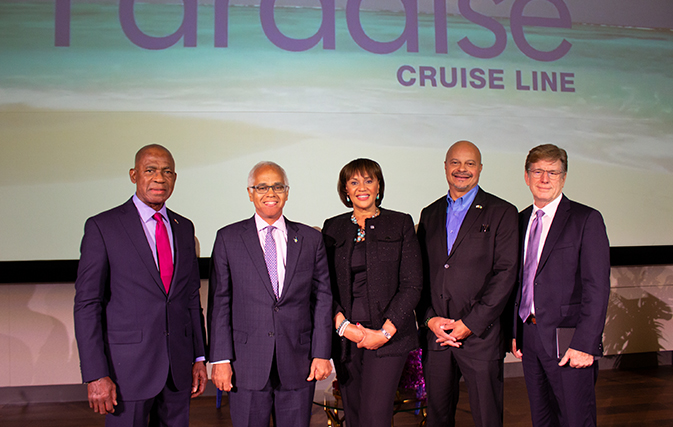 It is this resilience, shared by so many Bahamians, that has served the island well in recent weeks. After Hurricane Dorian made landfall in northern Bahamas on Sept. 1, bringing with it 48 hours of 300-kilometre winds and rain, the people of The Bahamas have had their will and spirit tested like never before. But like Lady Di, they are steadfast in their resilience to overcome challenges and are well on their way to recovery.

This message was made clear at a media briefing hosted by the Bahamas Ministry of Tourism at Toronto’s Hotel X yesterday. Speaking to both trade and consumer media, Bahamas Minister of Tourism & Aviation Dionisio D’Aguilar emphasized the fact that despite the devastation that Dorian brought to the north, much of The Bahamas was left untouched.

“When you look at a map of The Bahamas you quickly discover that it is an archipelago, a group of 700 islands – 16 of which we actively promote – and 2,500 cays that spans almost 1,000 kilometres,” he said. “Hurricane Dorian, with a diameter of just 125 kilometres, only struck our two northernmost islands – Abaco and Grand Bahama. But thankfully it left the rest of the country – almost 90% of it – completely unscathed, untouched and not in any way impacted by the storm.”

Popular destinations like Nassau, Paradise Island, Exuma and Bimini were all spared and remained open to tourists. But the ripple effects of Dorian extended far beyond the northern islands, with media coverage of its aftermath impacting the whole of the country. 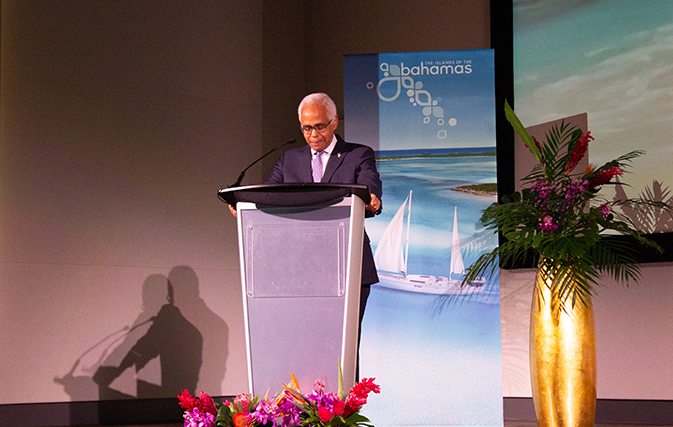 As a result, visitation saw a near immediate decline, said D’Aguilar. Prior to Sept. 1, The Bahamas was coming off a historic year in 2018, with stopover visitor arrivals up 17% over 2017, and those from Canada up a very respectful 14%. This momentum was maintained in the first eight months of 2019, when total visitation saw another 13% increase over the same period in 2018. From Canada, visitor arrivals was up another 10%, complemented by a 7% increase in air capacity.

But then Dorian hit, and September arrivals from Canada dropped by 15%. October is projected to fare even worse with another 5% dip. And when you consider the fact that well over 50% of The Bahamas’ GDP comes from the tourism industry, and that two out of every three Bahamians are employed by the tourism sector, any drop in visitation has a major impact on one of the most tourism-dependent countries in the world.

Pleading with the audience, D’Aguilar said: “My reason for being here is to seek your assistance in reversing that decline and recognizing that it’s not business as usual in The Bahamas – that will be years away. But tourism business goes on and it is crucial as we go forward. We simply cannot get to success without our tourism industry continuing as a strong driver of our economy.”

Joy Jibrilu, Director General of the Bahamas Ministry of Tourism, also stressed the importance of moving forward without forgetting those most impacted by the storm.

“While we don’t want to forget, we have to balance the needs of the Abaco Islands and the east end of Grand Bahama particularly, with the fact that business must continue,” she said. She praised global relief efforts, thanking those who’ve contributed their time, money and materials, and was excited to announce that their efforts have paid off.

“Many homes and businesses were destroyed, but just two months after the storm Grand Bahama is open for business, welcoming travellers back to its hotels and resorts, its cruise terminal and airport. And while it will take a much longer period for Abaco to rebound, with Grand Bahama back on stream we are so happy we can say that not 14, but 15 islands are ready to welcome you,” she said.

Jibrilu is encouraging travellers to come back to the capital of Nassau, where 80% of visitors start their vacations, as well as to Exuma, comprised of 365 cays, one for every day of the year. With direct flights to Nassau available with Air Canada Rouge, WestJet and Sunwing, and one to Exuma from Toronto with Air Canada Vacations, both destinations are easily accessible for Canadians. Those looking to travel by boat can also take advantage of cruise and hotel packages with Bahamas Cruise Line, which sails to The Bahamas from Palm Beach, Florida.

The destination’s many offerings are highlighted beautifully in the Ministry’s new brand campaign, which D’Aguilar described as “edgy and soulful”. Using the hashtag #BahamasStrong, the campaign, comprised of a series of promotional videos, is based on the Grammy award-winning song ‘Fly Away’ by Lenny Kravitz, who, coincidentally, is the neighbour of none other than Lady Di. Kravitz, whose mother was Bahamian and who gets his pineapples fresh from Lady Di each morning, has lived in Eleuthera for the past 32 years.

“Bahamians are very unique people, they’re very hospitable, they’re warm and they’re really funny with a great sense of humour,” said Kravitz in a promotional interview. “After hard times, after struggle, we come together and we celebrate – it’s just the Bahamian thing to do. I guess the right word for it is ‘resilience’.”