Canada has procured up to 249,000 doses of Pfizer’s two-dose vaccine. “We’re ready to rollout vaccine doses as soon as they’re approved by Health Canada,” said Trudeau, adding that he anticipated that the first wave of Canadians could be getting their vaccinations by next week. 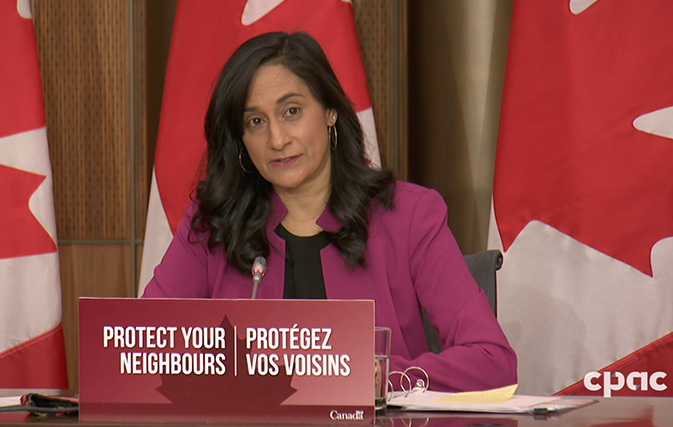 The Canadian government has agreements with six other vaccine candidates. In addition to the vaccines arriving this month, “millions of doses are on the way,” he said, continuing well into 2021.

Any vaccine approved for use in Canada will be safe and effective, he added. “These vaccines don’t get approved unless they’re safe for Canadians,” said Trudeau.

This first wave of vaccine distribution will happen through 14 different distribution sites across the country.

With these 249,000 doses coming in December, vaccinations will begin with the most vulnerable people in the population, he added.

Minister of Public Services and Procurement, Anita Anand, said Canada took “an unrelenting approach to procurement” of the vaccines.

Millions and millions of doses of vaccines will continue to flow into Canada in early 2021, added Anand.

“We will not rest until we climb this mountain,” she said.

Pfizer needs to be assured that the provinces and territories are ready to receive those shipments, said Anand. “The last kilometre is with the provincial and territorial jurisdictions.”

Asked about the timing of the announcement, Trudeau said: “We wanted not to get people’s hopes up. This is something Canadians have been looking forward to for a long time.”

“Being able to start with a smaller number and rapidly scale up … this is a good thing to allow the folks on the ground to deliver, especially with the Pfizer vaccine,” he added.

Supplies are already on their way from Belgium, where Pfizer has manufacturing operations.