VANCOUVER — Low-cost carrier Hong Kong Airlines is turning up the heat on pricing after it announced daily lift-offs between Vancouver and Hong Kong with introductory fares that start as low as $750 plus taxes peak season round-trip and dropping as low as $500 plus taxes in the off-peak late summer season.

“Competition is good for the customer,” said David Du, Marketing and Sales Manager for the airline. In a decade HKA has grown at a fast clip into 36 countries. Members of the HKA executive team out of Hong Kong joined Vancouver team members to meet with travel agents and members of the Asian community during a special dinner at the upscale Sun Sui Wah seafood restaurant on Vancouver’s Main Street.

While HKA is going after the ethic VFR market – where price points are important especially for larger groups – it is not ignoring further tertiary markets as it brings in attractive pricing for those wanting to explore Hong Kong or use the city as a jumping off point to explore Asia.  HKA and Jet Airways recently entered into a codeshare partnership aimed at enhancing connectivity between India and Asia-Pacific. 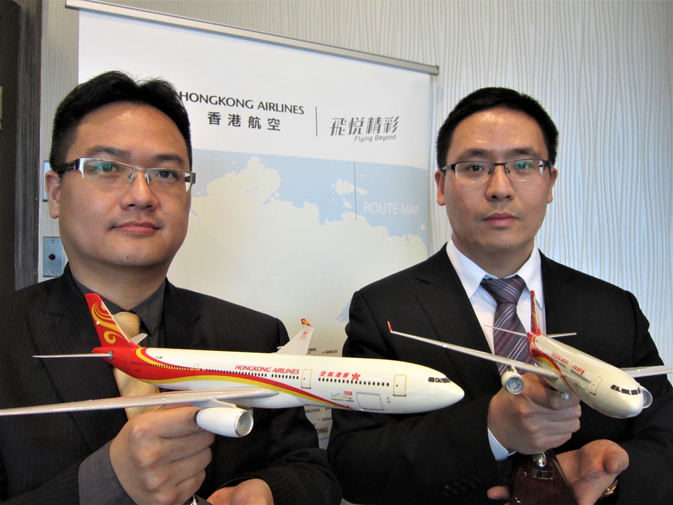 On the YVR route, HKA will butt heads with two major and established carriers: Cathay Pacific, Asia’s largest carrier, and Air Canada.  Neither are lightweights in terms of operations fleet size and marketing. As well, carriers such as Delta are known for coming in with deals. But HKA is still known for landing an eye-catching price even in turbulence.

The airline has rolled out special offers. Du quoted prices as low as $750 plus taxes from June 30 to Aug. 14 for a roundtrip between the two cities. From August 15 to Oct. 28, the price drops to $500 plus taxes. However bookings must be made during the month of March to receive the lower fares.

Vancouver-based General Manager Benjamin Li said the airline’s decision to enter the North American long-haul market came after it had completed long-hauls such as the Gold Coast. “We realized we have the ability to operate long-haul,” he said. HKA has built a reputation on efficient, low-cost short or mid-distance travel destinations. Vancouver loomed as a natural Pacific West Coast gateway to North America and in Canada was one of two cities with a large Asian population already travelling to Hong Kong and China. Figures indicate that up to half a million Chinese travel between the gateways annually.

HKA jumps into the market at a time when, despite a tax on foreign ownership, Hong Kong and Chinese investors are buying or have bought homes in B.C.’s Lower Mainland or nearby Seattle.  Resident Chinese are taking advantage of North American schools and universities for their children. The market also includes so-called ‘astronaut’ families where the family lives in the B.C. Lower Mainland, with one parent living in Hong Kong and doing business throughout Asia, with a lot of flying back and forth across the Pacific between family and work.

The North American YVR gateway also aligns with HKA’s latest burst of global expansion. During the past decade it has covered a network of 36 major cities across the Asia Pacific region, including Gold Coast, Auckland, Beijing, Shanghai, Taipei, Tokyo, Sapporo, Seoul, Bangkok, Bali and Okinawa and has codeshare agreements with 12 airlines and 69 interline partners. It operates 32 aircraft, including A330s and A320s.

Chief Operating Officer Ben Wong Ching-ho has been quoted in the Asian business press as saying the airline is now looking at Europe and the U.S. for expansion, as more Chinese want those markets. Wong says that HKA has 15 new A350 passenger aircraft (which lend themselves to long-hauls, with more comforts) on order from Airbus and the $4 billion order is to begin delivery in 2018. By the end of 2018, HKA’s fleet will round out at 50 aircraft in total. By comparison, Cathay Pacific is the largest user of A350s and has 46 alone after taking delivery of a large complement in 2016.

Both Du and Li said during a press conference that they are stationed in Vancouver to develop business. Du said there is the potential once rights are obtained to easily use Vancouver as a stepping stone into the U.S. market or to other cities. The airline is also looking for partnerships.

The June 30 date start-up date was chosen as it is the day before two national holidays celebrated on July 1, Li said. There’s Canada Day, of course, and in Hong Kong July 1, 2017 marks the 20th anniversary of the unification of Hong Kong back to China.

Du said HKA has similar seats to other carriers but has reduced the number of seats in economy to provide more legroom. The aircraft’s business class has a mini-bar where passengers can fix their own drinks. There is full meal service and the airline has recently introduced new amenity packs.

Hong Kong Airlines has its own dedicated VIP Lounge at Hong Kong Airport while it uses the airport lounge at YVR. One of the features it offers is priority boarding for those travelling with children.

While HKA will be competing with Air Canada on the long-haul international flight, it is partnering with Air Canada domestically so passengers can easily transfer between the two carriers at both Hong Kong and Vancouver. “It balances out for both of us,” said Ming Chan, General Manager, Corporate Communications.

Already HKA is already hard at it marketing in Vancouver with functions. Du and Li say they will meet with any agency members who may have missed their Sun Sui Wah dinner or want more information on HKA. Li can be reached at benjamin.li@hkairlines.com.