OTTAWA — At his COVID-19 briefing yesterday Prime Minister Justin Trudeau was asked about vaccination passports and whether or not the federal government would relax the current travel restrictions for people who have been completely vaccinated.

Talk about vaccination passports has ramped up considerably in recent weeks, and countries including Canada have indicated interest. 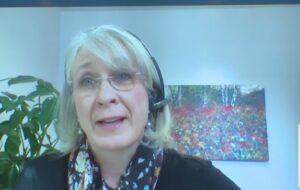 But with many parts of Canada including Ontario in the midst a third wave, and cases linked to variants of concern on the rise, Trudeau’s message yesterday was, not surprisingly, a familiar one: now is not the time.

“We are still in the middle of a very serious third wave,” Trudeau said, adding that the focus now should be flattening the curve. However he did add: “We all hope to reopen the border so we can start travelling again in the coming months.”

Trudeau has been careful to distinguish between vaccination passports for international travel, and proof of vaccination for use domestically.

“We have already seen the importance of vaccinations for international travel,” said Trudeau.

“When it comes to the details, we are still working on them,” he added.

“NOW IS NOT THE TIME TO BE THINKING ABOUT TRAVEL”

Health Minister Patty Hajdu reiterated the government’s message, taking the wording a step beyond the usual ‘now is not the time to travel’.

“Now is not the time for Canadians to be thinking about travel,” said Hajdu.

The travel industry has taken issue with this kind of messaging, as it jeopardizes not just bookings for travel now, which are understandably almost nil, but also future travel. The retail travel sector has been decimated by the pandemic, and generating client interest in travel for later in 2021 and into 2022 has been a lifeline for the battered industry.

Last month Hajdu said the G7 countries, including Canada, have made a commitment to stay connected and collaborate on the issue of vaccination passports.

Yesterday Hajdu said: “We are committed to having these conversations [about vaccination passports] with our international partners.”

When decisions are made at the international level, Hajdu added, “we want to make sure Canadians have those documents for international travel.”

Trudeau was also asked whether proof of vaccination would be sufficient for Canadians currently abroad who want to come home to Canada. “We will rely on the evidence at every stage,” said Trudeau. He said Canada will continue its talks with the U.S. on the subject, noting that the U.S. “may take measures before us.”