TORONTO — One of the first reservations on the new Scenic Eclipse came to US$354,000 for four sailings, back to back, in the Penthouse Suite. Which makes you wonder, did they book through a travel agent?

“Our base commission is always 10% and it goes up based on the contract,” says Scenic Chairman and Owner, Glen Moroney. 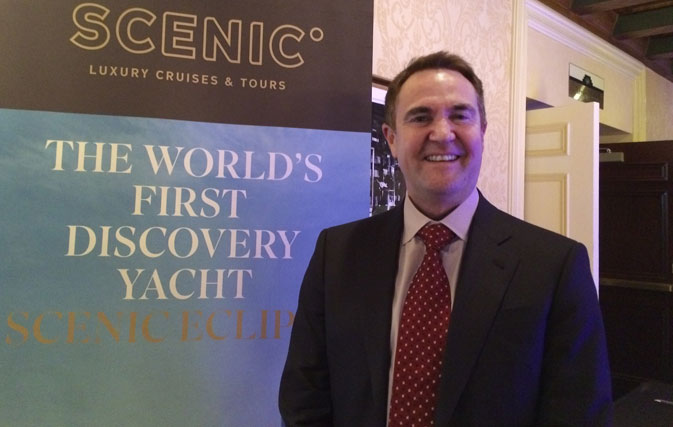 Whether or not an agent benefitted from that particular windfall, there will be more high-yield commission opportunities to come. Billed as the world’s first ‘discovery yacht’ and set to launch in 2018, Scenic Eclipse is one high-end ship, boasting a nearly 1:1 staff to passenger ratio, 114 all-veranda suites and two on-ship seven-passenger helicopters (and a seven-passenger submarine) for up close and personal tour experiences in some of the most remote corners of the world.

While sister cruise line Emerald Waterways is a four-star product, and Scenic’s other ships are five-star, Scenic Eclipse will be a six-star ship, an ultra-luxury mega yacht with just 228 passengers (200 in Polar regions).

“Absolutely everything is included,” said Moroney. “Scenic Eclipse is the most comfortable, luxurious way to see the world.”

The ship is set to launch Aug. 31, 2018 with a maiden voyage from Istanbul to Venice, followed by ‘discovery voyages’ to the Americas, Antarctica, Europe and the Mediterranean and the Arctic and Norwegian Fjords.
Weighing in at 16,500 gross tonnes, Scenic Eclipse will have eight passenger decks and a crew of 172 (182 in Polar regions). Six onboard dining options include Pan Asian, Italian and Contemporary French. There are also four lounges with a 240-seat theatre, three bars and a spa. 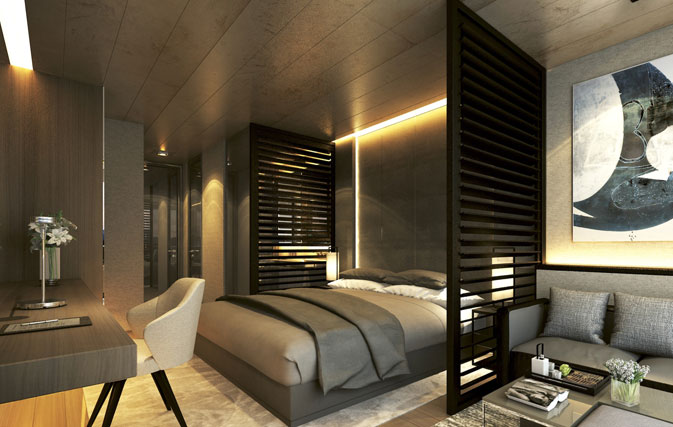 Renderings for Scenic Eclipse show a décor scheme that wouldn’t be out of place in an upscale London or New York boutique hotel; everything is very sleek and stylish. Glen’s wife Karen Moroney designed the interiors and took her inspiration from a number of the world’s leading luxury hotels.

Given the stabilizers on the ship, passengers might even think they’re in a hotel back on land. Scenic Eclipse is the first passenger ship ever to be outfitted with zero speed stabilizers, making sailings as smooth as they can possibly be. Up until now only private yachts, like the 414-foot megayacht Octopus belonging to Microsoft co-founder Paul Allen, have featured zero speed stabilizers. The technology is said to cut a ship’s roll by up to 90%.

Scenic Eclipse will also have the highest passenger ship ice class rating – Polar Class 6 (Ice Class 1A Super) – providing an added element of safety for guests. The passenger count for Arctic and Antarctic cruises will be limited to 200, which allows for more landings per day for each guest.

Scenic Tours has come a long way since its start up days. Moroney launched the company in 1986, carving out a niche with motorcoach tours in Australia. Scenic’s land-based tours now take passengers all over the world, but the source market is still primarily Australia, although Moroney doesn’t rule out developing land product for the North American market down the line.

Moroney got into the cruise market in 2007 (“I showed up at shipyards and said ‘I want to build a cruise ship’’); the company now has 20 ships sailing throughout Europe, Russia and Southeast Asia, with three more vessels coming by the end of 2017. Scenic opened up shop in Canada in 2008. Sister brand Emerald Waterways launched in 2014 and that company went from zero to seven ships in three years; “it’s been very successful”, says Moroney. Meanwhile there’s an option for a sister ship to Scenic Eclipse to be delivered in June 2019.
The Scenic Eclipse brochure with 18 itineraries is now available. For more details see scenic.ca, email info@scenic.ca or call 1-866-689-8611.