TORONTO — Sandals has kicked off 2020 with a renewed clarity – as the year suggests – and it’s thanking its loyal travel agent partners along the way.

At Toronto’s ultra-luxe Bisha Hotel last night, the company capped off a 15-city Agent Appreciation roadshow that, for the second year in a row, followed a more intimate dinner format. This, said Maureen Barnes-Smith, Director of Sales & Marketing at Unique Vacations Canada, the worldwide representatives for Sandals & Beaches Resorts, allows for more personal interactions in a way that Sandals’ typically big product unveilings do not.

“After doing these smaller dinners in 2018, we realized the feedback was quite good,” she told Travelweek. “We got more results out of it, we could track what was going on. An agent would come to the dinner and say ‘I made a booking.’ So we can easily tie in the ROI to these smaller events more than the larger ones we have.”

Barnes-Smith assured that the big blowout bashes will still be on the agenda, however agents can expect more intimate events throughout 2020 in smaller regional markets like Sudbury, the Okanagan Valley, Parksville and small towns in Nova Scotia. The goal, she added, is to be more transparent to agents and to highlight policies that reflect the company’s close relationship with them.

“The Canadian market continues to be a strong market for us. It was a busy and hectic 2019, and we hit our growth targets for the most part,” she said. “Our agents play a critical role in our success, they continue to be the most important part of our distribution channel. We haven’t changed our strategy since day one, which is make travel agents the key cornerstone of our distribution.”

Noting how Sandals “really has to up our game” amid increasing competition, Barnes-Smith said that the company’s footprint “literally touches every single province in Canada”. There are currently three salespeople based in western Canada, two in Quebec and three in Ontario, in addition to a full-support office that’s available to all agents. Plus, Sandals will also be increasing the way it works with home-based agents, which Barnes-Smith described as a growing market.

“We’ve refocused our tagline, which is ‘The World’s Only Five Star Luxury Included Vacation’ and are breaking down what that means to the trade,” she said. “The purpose of these dinners is to create a clearer understanding of what that tagline means. These five pillars are the cornerstone of everything Sandals.”

Barnes-Smith also noted that Sandals no longer classifies itself as ‘all-inclusive’ but has evolved into something more. “If you have one buffet restaurant included that automatically means all-inclusive. Luxury-included, on the other hand, means you’re offering food, service and quality that you’re not going to get anywhere else. Where else are you going to get Rolls Royce transfers, and overwater suites, chapels and pools?”

Agents can learn more about Sandals’ key messaging throughout the year at similarly small dinners, as well as through its workshop series, which will relaunch in April. The Toronto workshop will take place in Yorkville on June 2.

Williams, who encouraged those in attendance to register for the workshop, is hoping to repeat the success of 2019 in 2020, with help from agents.

“Let’s increase commissions, we want to see commissions with a comma,” she said. “So be innovative, come up with new ways to attract business.” 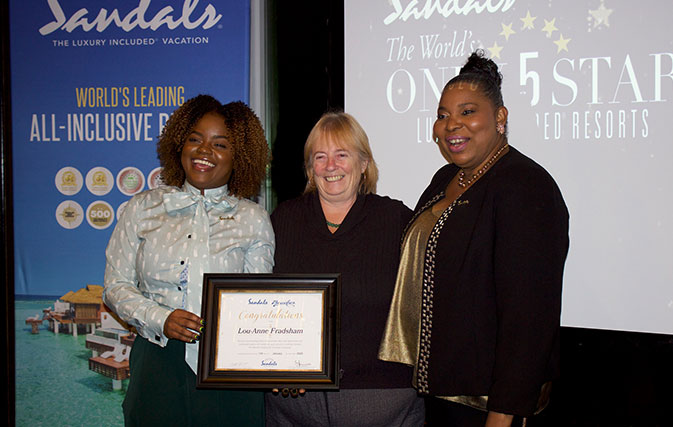 How? Follow the lead of Lou-Anne Fradsham of UNIGLOBE Bon Voyage Travel, who was honoured last night for her continued loyalty and innovation. According to Barnes-Smith, Fradsham is credited with booking Sandals’ first-ever pickleball group at Sandals South Coast.

“We’re here primarily to serve you and want you to know that for any client you have, there’s a Sandals or Beaches product that matches them,” she said. “We’ll have lots of exciting news coming in the first quarter of 2020. The best is yet to come!”

Here are some recent and upcoming product updates for 2020:

• Sandals Montego Bay, which opened 39 years ago, has been totally transformed, with every room category completely upgraded
• The Sandringham Block at Sandals Royal Caribbean is being completely gutted to reflect a more five-star look and feel, and will be completed in time for Valentine’s Day
• The highway from Montego Bay International Airport to Sandals South Coast has been renovated, allowing for a much more comfortable transfer for guests
• New Rondoval Suites are coming to Sandals South Coast, starting with nine, which are being built this year
• The garden at Sandals Halcyon has been replaced with a sprawling pool, which connects blocks 5, 6, 7 and 8