CALGARY — Canada should reopen the border to fully vaccinated foreign visitors, Alberta Premier Jason Kenney said yesterday, adding he will advocate for the loosened rules the next time provincial leaders have a conversation with Prime Minister Justin Trudeau.

“Scientifically the chances of them transmitting are statistically insignificant. So we should follow the science, not politicize this,” he said while at the Calgary Stampede.

“We have 800,000 Canadians who work in the travel and tourism industries. We need to get them back to work.”

Kenney said he raised the issue with Trudeau while he was visiting Calgary last week and plans to do so again this week when the prime minister has a call with provincial and territorial premiers. It will be the first such call since June 17, and comes the week before the current order shutting the Canada-U.S. border to non-essential travel is set to expire.

Canada recently got rid of the 14-day quarantine rule for returning citizens and permanent residents who can show they are fully vaccinated against COVID-19 and tested negative.

The border remains shut to tourists and residents from other countries travelling for non-essential purposes. The Canada-U.S. border is closed to non-essential travel until at least July 21.

Trudeau has said he knows people are impatient to see travel resume, but the country can’t risk undoing its progress on fighting COVID-19 by opening up before enough people are vaccinated.

The federal government says until 75% of Canada’s population is fully vaccinated, border measures are the best way to stop the arrival of new variants of the virus that causes COVID-19.

It wasn’t immediately clear which other premiers want to see the country’s borders reopen. Kenney says of his colleagues, he’s been leading the charge.

Back in early June, Ontario’s health minister and solicitor general penned a letter to the federal ministers of health and emergency preparedness to say Canada’s existing border measures weren’t working.

It said Ontario wanted a national strategy on borders that would include a way to enable “safe international arrivals by fully vaccinated travellers.”

Meanwhile Canadian tourism businesses and organizations can now tap into $500 million in funding, part of the new Tourism Relief Fund.

Mélanie Joly, Minister of Economic Development and Official Languages made the announcement yesterday at Closson Chase Winery in Hillier, Ontario. 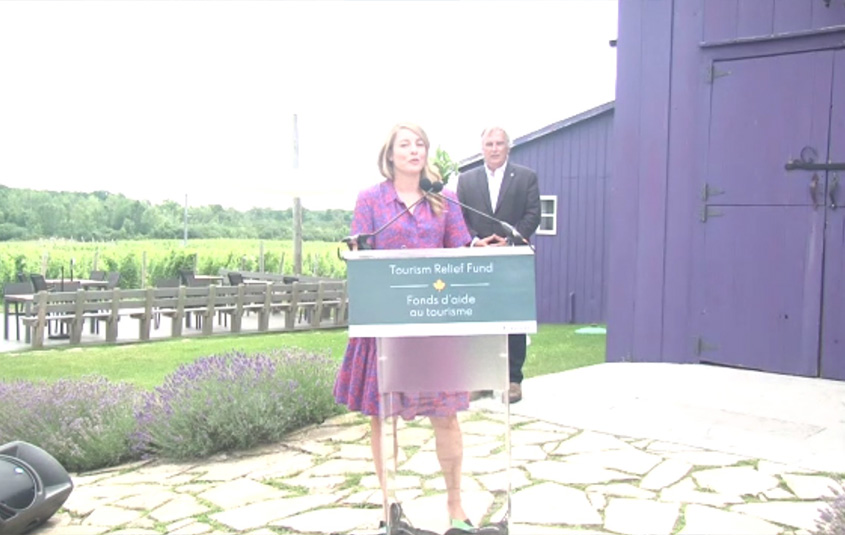 Mélanie Joly, Minister of Economic Development and Official Languages at Closson Chase Winery in Hillier, ON

“Our government has been there for the tourism sector since the beginning of the COVID-19 crisis and today’s announcement is about adding another tool to the suite of COVID supports that will help it recover and prepare for future growth and create jobs,” said Joly.

With file from The Canadian Press