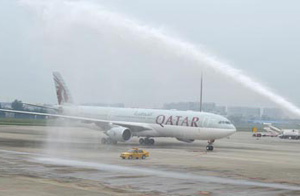 One of just seven carriers worldwide rated five-star by the Skytrax airline quality agency and the organization’s Airline of the Year 2011 and 2012 and runner-up 2013, Qatar Airways is the only one of the ‘Gulf Big Three’ carriers slated to join any of the global airline alliances.

It received clearance to board oneworld after successfully completing a thorough review of its readiness, conducted by British Airways, which is sponsoring Qatar Airways’ entry into the alliance, with oneworld’s central team.

Qatar Airways completes its oneworld implementation program just one year after receiving its invitation to join, announced at a press conference in the alliance’s New York home in October 2012. This will make its induction into oneworld one of the fastest in the alliance’s history. Normally it takes around 18 months for any airline to be readied to enter any alliance.

Qatar Airways’ addition to oneworld will come shortly before the airline moves into its new home base, Hamad International Airport, which has been designed to strengthen Doha’s position as a premium global hub, with an eventual capacity for 50 million passengers a year.

From its first flights on Oct. 30, Qatar Airways will offer oneworld’s full range of services and benefits.