TORONTO — Mexico is seeing a “fantastic year” from Canada, with 6% growth from January through June, said Rodrigo Esponda Cascajares, Director for Canada for the Mexico Tourism Board.

“I’m impressed especially since Canada is such a mature market” for the destination, he added. In 2013 some 1.6 million Canadians travelled to Mexico. 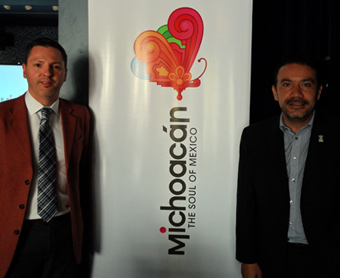 Rodrigo Espondanda Cascajares, Director for Canada for the Mexico Tourism Board (left) and Roberto Monroy Garcia, Minister of Tourism for the state of Michoacan, attend a recent MTB lunch.

Speaking at a lunch event hosted by the MTB and the State of Michoacan on Mexico’s Pacific coast, he said that visitation has been helped by record lift. There’s been a 14% increase in seats from Canada to Mexico this year.

The country’s Live It to Believe It ad theme continues to gain traction, with the second stage of the campaign focusing this year on Chiapas, Oaxaca and Guanajuoto. Altogether the MTB spends $5 million in the Canadian market.

Roberto Monroy Garcia, Minister of Tourism for the state of Michoacan, noted that his destination is known especially for its beaches and butterfly sanctuaries. Morelia is famous for its cathedral and historic downtown, while Zamora “is the land of strawberries” (and Uruapan produces six billion avocados per year, “one for every person on the planet”). Michoacan promotes themed sightseeing routes including a Sea Turtle Route, and a Tequila Route. Michoacan is a five-hour flight from Canada.