JetBlue to the rescue! Flight attendants save French bulldog during flight

ORLANDO — A three-year-old French bulldog has been given a new lease on life thanks to the quick thinking of a JetBlue flight crew.

Michele and Steven Burt were onboard flight JBU 330 flying from Orlando to Worcester, Massachusetts when they suddenly noticed their dog Darcy in distress in her pet carrier, which had been placed under the seat in front of them. After taking her out of the carrier, the couple saw that the dog’s tongue and gums had turned blue, a sure sign of insufficient oxygen.

According to a Facebook post written by Michele and shared by a friend, Michele placed Darcy on her lap to cool down, at which point a flight attendant came and politely reminded her that the pet was to remain under the seat in her carrier, as per flight regulations.

After explaining that Darcy was in medical distress, two other flight attendants, Renaud and Diane, brought ice in bags for the poor pup. Renaud, who has a French bulldog of his own, also brought a small oxygen tank with a mask attached, saying “maybe this will help.” 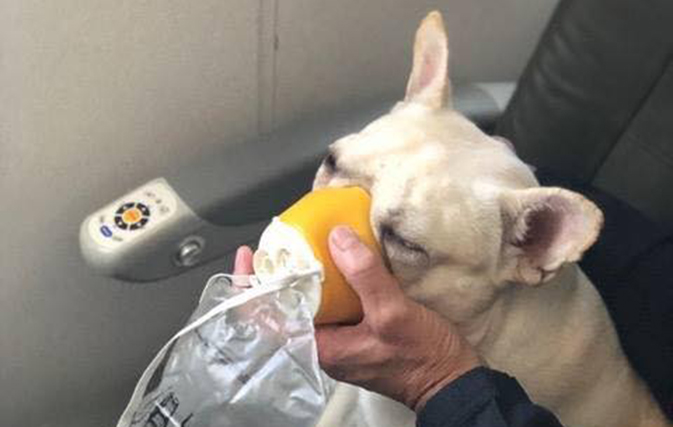 “I placed the mask over her face, and within a few minutes she became alert and after a short time she didn’t want the mask,” wrote Michele. “I believe Renaud and Diane saved a life.”

She went on to praise the flight crew for looking beyond the fact that Darcy was “only a dog”.

“It may have been only a dog to some, not a major disaster certainly, but a family member to us,” she wrote. “Goodness and kindness along with the ability to assess a medical crisis, albeit a canine in crisis, saved the day.” 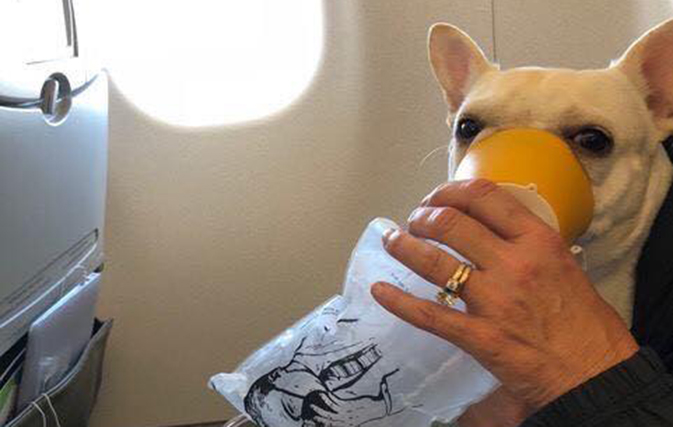 Michele also confirmed in her post that Darcy has made a complete recovery, and that in the future she will no longer fly without her vet’s clearance.

JetBlue’s flight crew certainly helped prevent another pet tragedy in the air. Earlier in March, a French bulldog puppy died in-flight after a flight attendant forced the owners to place the pet carrier, which contained the dog, in an overhead bin.