The evening included a travel industry reception complete with island-inspired cuisine in Jamaica’s private gondola suite high above the stands in Scotiabank Arena. 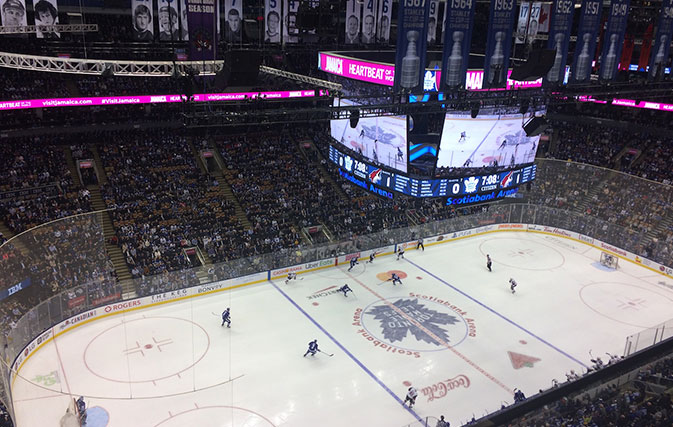 There were also performances by ska band The Arsenals, and one lucky couple watching the game won a trip for two to Jamaica.

Dan Hamilton, the JTB’s District Sales Manager and Angella Bennett, Regional Director, Canada for the JTB were joined by Donnie Dawson, Deputy Director of Tourism for the JTB as hosts for the night, welcoming the trade media, ACTA and tour operators including Sunwing, ACV and TravelBrands.

The game went into overtime but a Leafs goal gave the hometown heroes a 3-2 win over the Arizona Coyotes.

The JTB debuted its ‘JAMAICA, Heartbeat of the World’ brand positioning in January at Caribbean Travel Marketplace 2020. “We are excited to launch ‘Heartbeat of the World,’ which reinforces our position as a global leader among travel destinations and establishes Jamaica as the single destination every traveller must experience,” said Donovan White, Jamaica’s Director of Tourism, at the CTM unveiling last month. “On the map, Jamaica may seem like a small dot in the Caribbean Sea. But her influence on the world culture is the size of a continent. We are a cultural giant and we continue to have an indelible impact on the world’s food, music, sport, and literature while offering larger-than-life bucket list experiences with extraordinary, talented people.”

The new campaign encompasses Jamaica’s music, cuisine, sports, adventure, nature and wellness, and puts Jamaica at the centre of global culture, as “the beat that makes the world move.”