RIU announced today that a new hotel in its Riu Plaza urban line will open in downtown Toronto by 2021. Now wrapping up its design phase, the new property is set for a newly-built mixed-use modern tower block in Toronto’s financial district.

The project is a US$100 million investment, says RIU, and one that will “establish the first RIU hotel in Canada and will add continuity to the hotel company’s plan to expand into the world’s great cities.”

The 350-room hotel will offer meeting rooms, a restaurant, bar and gym. The upper levels of the building will be for residential use. 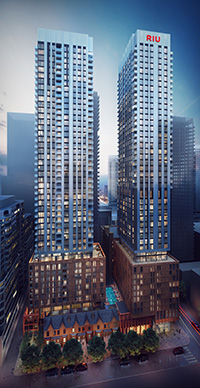 He adds: “We hope this hotel attracts RIU customers around the world to discover the city of Toronto with us, and also hope that the loyal customers we have in Canada decide to discover our urban product. This project means a new drive to raise awareness of our brand within and beyond the country.”

He notes that the Canadian market is well-acquainted with RIU resorts, as one of RIU’s main markets for RIU hotels in the Caribbean, Mexico and Central America, available exclusively in Canada with Sunwing.

All-inclusives remain the core of RIU’s product lineup, comprising more than 70% of its properties. However back in 2010 the company began diversifying with its urban line and there are now six Riu Plaza hotels globally, in Panama, Guadalajara, Miami Beach, New York, Berlin and Dublin. Three more Riu Plaza hotels are currently under construction: Riu Plaza Espana in Madrid; Riu Plaza London and a second Riu Plaza property in New York City.