CALGARY — A new pilot project for COVID-19 testing at Calgary Airport is being trumpeted as a first step in shortening and hopefully one day soon eliminating the 14-day quarantine, with more Canadian airports almost certainly taking part in the near future.

The new program, announced by the government of Alberta and Calgary International Airport, in partnership with the federal government, will offer travellers flying into YYC the option to take part in COVID-19 testing upon arrival at the airport. 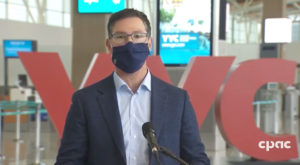 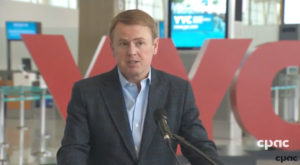 As long as passengers get a negative result within 48 hours, they just have to go back for a re-test in 6 – 7 days. Canadian travellers returning from international destinations can follow the same protocol with the voluntary tests, but cannot travel outside Alberta for 14 days.

The idea is that the 14-day quarantine, one of the biggest challenges for getting travel and tourism restarted in the wake of COVID-19, could at least be shortened, and one day soon eliminated, with this testing pilot project.

In a joint media statement, the governments announced the launch of a new pilot program to safely test a reduced quarantine period, while protecting Canadians from COVID-19.

WestJet notes that international travellers returning to Canada through the Calgary International Airport via a nonstop flight will be initially invited to participate.

For eligible travellers, quarantine will only be required until a negative test result is received, reducing the quarantine from 14-days to as few as two.

The start date of the test trial is November 2.

Details can be found here.

Calgary Airport Authority CEO Bob Sartor said that while the pilot project will start with Calgary Airport, “I would daresay we won’t be the last.”

Sartor added: “We really hope this pilot will help in reducing and one day eliminating the 14-day quarantine. This is a first step for the safe recovery for air travel.”

WestJet President and CEO Ed Sims, also at the event, said WestJet is looking forward to helping to “safely open travel expansion right across the country. We look forward to moving this trial forward.”

A strong advocate for the use of testing to protect customers and employees, Air Canada announced its voluntary COVID-19 testing project at YYZ in September 2020, in partnership with McMaster HealthLabs (MHL) and the GTAA.

“We know Canadians expect the rich data from these test results to lead to a loosening of the federal government’s quarantine requirements immediately, which will allow families to reunite and the economy to resume,” ays Calin Rovinescu, President and CEO at Air Canada.

Rovinescu noted that Air Canada’s customer surveys clearly show that Canadians favour safe and science-based alternatives to blanket quarantines. The results from the McMaster study at Toronto-Pearson were instrumental in guiding the federal government and public health agencies to add the easing of quarantine to this latest testing initiative, he added.

“I have personally heard from numerous business leaders in Canada and from other countries who are very anxious to see the quarantine requirements safely abridged as soon as possible,” said Rovinescu.

Since the Toronto-Pearson study began on Sept. 3, MHL has conducted over 28,000 tests of arriving travellers who volunteered to participate. As Air Canada’s interim report noted, more than 99% have tested negative for COVID-19 with less than 1% having indicated COVID-19.

“NO INDUSTRY HAS BEEN HIT HARDER”

In making the announcement, Alberta’s Minister of Jobs, Economy and Innovation, Doug Schwitzer, said: “No industry has been hit harder by the pandemic than the travel industry.”

The impact from Canada’s 14-day quarantine has been “enormous”, he added.

“We must find ways to bring back safe travel, and one of the biggest challenges is the 14-day quarantine requirement,” said Schwitzer.

He added that the pilot program will operate initially at Alberta’s Coutts Port of Entry, which gets 95% of land border crossings between Alberta and the U.S., as well as Calgary International Airport. Schwitzer said that the pilot project will likely be expanded to Edmonton’s airport next, likely in the new year, and hopefully by February 2021.

Ontario Premier Doug Ford said he will be keeping “a really sharp eye” on the project.

“I’d be open to it, but I just first want to see what’s happening in Calgary with it, because Toronto is much different than Calgary,” said Ford.

With file from The Canadian Press