Comp Fund strong at $23.5 million but challenging days ahead: TICO

TORONTO — By the first weeks of the pandemic and the travel restrictions, the number of TICO registrants was down 11%.

In mid-March, when COVID-19 became a pandemic and the global travel industry essentially shut down, life as we know it changed, said Smart at yesterday’s TICO AGM.

“People are calling it a once-in-a-generation impact. Let’s hope so,” said Smart. The pandemic’s heroes include travel agents, he added, “for their tireless efforts in getting travellers home” in those early weeks.

TICO has brought in a number of measures to help travel agencies and wholesalers get through this difficult time, including several fee deferrals.

With the pandemic and its travel restrictions now into its seventh month with no immediate end in sight for the travel industry, Smart was asked if fees will be deferred well into 2021. Smart said that while it’s “a bit premature to make any commitment beyond the current fiscal year,” he said TICO is well aware of the pain and challenges and difficulties facing registrants right now.

He added that TICO is in constant communication with Ontario’s Ministry of Government and Consumer Services “and we will keep registrants informed accordingly.” 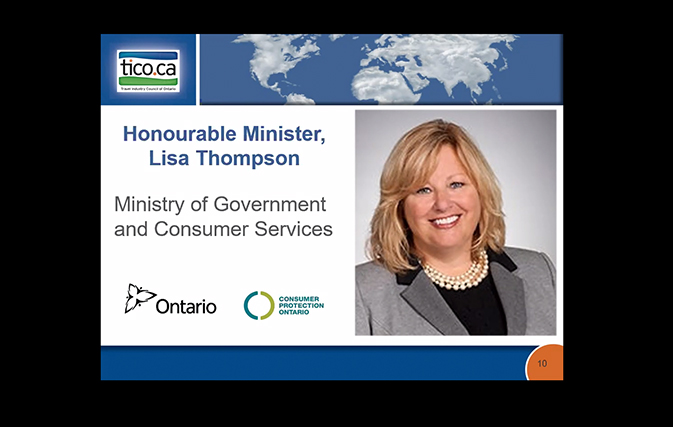 Hon. Minister Lisa Thompson took part in yesterday’s AGM, via Zoom. The event was held in Mississauga with limited capacity.

“We recognize the seriousness of the challenges ahead,” said Thompson. “We’re looking at how we can support the travel industry and bring financial relief to the sector.”

She said the Ontario government “will take the necessary actions to protect travel agencies and wholesalers. We are committed to the recovery of our travel industry in this province.”

Smart says TICO received a sharp uptick in calls and inquiries in the immediate aftermath of the pandemic, as travellers sought answers in a confusing and chaotic time. “There was a surge of calls and, yes, complaints,” said Smart, as travel plans were cancelled and travellers received vouchers and future travel credits instead of refunds.

More news:  WestJet is cutting 80% of its Atlantic Canada capacity; 6 gateways plus YQB

The role of TICO going ahead includes “reassuring consumers of the resiliency of Ontario’s travel industry”, and the benefits of purchasing travel through TICO registrants, he said.

Consumers also need to be aware of the consumer protection available to them, he added. The Compensation Fund currently stands at $23.5 million.

The push to strengthen the Fund with a consumer co-pay model for the Compensation Fund, like in Quebec, has been an issue for several years. It could take up to three years for the travel industry to recover to pre-pandemic levels, notes Smart. That could have impact for the funding model. While the pandemic has forced the Ontario government to make the difficult decision to pause its review of the Travel Industry Act, “everything is subject to review,” he said.