“Business models need to evolve to value social impact as much as profit”: G Adventures

This story originally ran in the September 26th, 2019 issue of Travelweek magazine. To get Travelweek delivered to your agency for free, subscribe here.

TORONTO — Shanti’s story is one that many women can relate to. Married to an abusive husband and desperate to protect her three young daughters, she began a frantic job search in hopes of gaining her independence. But, as she quickly discovered, opportunities were scarce in her home country of India.

It wasn’t until she found refuge in the Azad Foundation that she was able to find stable employment as a licenced driver and gain enough confidence to report her husband’s abuse to the police. The ripple effects of one job were far-reaching, to the point where her husband eventually walked out on her, a day that Shanti refers to as “liberation day”.

The Azad Foundation, founded in Delhi in 2008 as a way to “provide livelihoods with dignity for resource-poor women in urban India”, didn’t just give Shanti a job, it offered her the chance to reach her full potential. Through its Women on Wheels program, which trains women to become self-sustaining professional drivers, and its partnership with G Adventures’ non-profit organization, Planeterra, Azad is able to give hundreds of women in India entry into the transportation and tourism industries, an opportunity that they never would have had otherwise.

Since first partnering with Azad in 2014 and subsequently funding Women on Wheels’ fleet expansion, G Adventures has taken the extra step of contracting the program as its India airport pickup partner. It now sends upwards of 5,000 travellers annually through the Women on Wheels program. 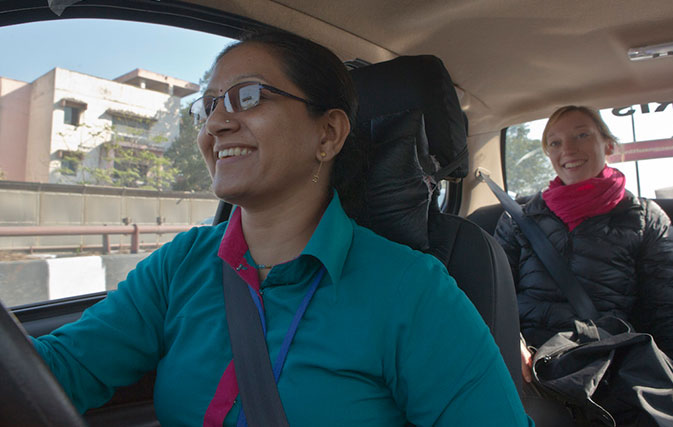 “They launched us into the tourism space and provided a stable income as we set to expand our programs across the country,” says Meenu Vadera, founder of Azad’s sister organization, Sakha Consulting Wings Private Limited. “As we grew, G Adventures grew with us, now using our services in Delhi and Jaipur. Thanks to G Adventures and Planeterra, we have a larger global community of advocates and ambassadors.”

Bruce Poon Tip, founder of G Adventures, adds: “Tourism employs more women than most other sectors. It has a low-barrier to entry and fosters homegrown skills that can be converted into formal livelihood opportunities. In parts of the world where women are marginalized and have limited access to education and resources, women can still enter the tourism industry and lead successful careers.”

More news:  A toast to its industry partners: Globus says thank you

This, in a nutshell, is the transformative power of tourism. It was a leading message at this year’s UN World Tourism Day with the theme of ‘Tourism and Jobs: A Better Future For All’.

According to the UNWTO, tourism generates 10% of the world’s jobs and it’s estimated that one job in the sector creates approximately 1.5 additional or indirect jobs in the tourism-related economy. In Organisation for Economic Cooperation and Development (OECD) countries, women account for 60% of employment in the tourism sector, and the global rate of female entrepreneurs in ‘hotels and restaurants’ (36%) is comparatively higher than in all sectors combined.

The tourism industry is also one of the world’s most resilient; in each of the seven years following the global economic crisis of 2010, the number of worldwide international tourist arrivals grew at 4% or above.

But despite its obvious global impact, tourism’s role in employment generation is often undervalued when it comes time to formulate and implement policy. Women, in particular, are at risk of unemployment, given various challenges that include poor working conditions, inequality of opportunity, violence, exploitation, sexual harassment and a large gender pay gap (on average they are paid 20-25% less than male workers for comparable skills).

This is why it’s more imperative than ever for feminists and entrepreneurs like Vadera to help level the employment field, and for travel companies like G Adventures to do their part in alleviating extreme poverty and empowering women around the world.

“Women earning an income have a greater agency and position to determine how it is spent, strengthens decision-making powers and builds self-esteem,” says Vadera. “Supporting a female entrepreneur often has the ripple effects of supporting her family’s needs as well, such as access to education and healthcare. Moreover, a confident, educated mother raises confident and respectful children. It can also have many direct and indirect opportunities for opening doors for women and reducing the gender inequality gap.”

Though some might say that Women on Wheels is ‘just’ a chauffeur company, Vadera would argue that “driving is just an excuse”, and what the program is really doing is breaking an image and provoking change in mindsets towards women. “We’re showing travellers a face of India that has strong, powerful women who can change the destiny of their families.”

The program has steadily grown since inception in 2008. The Azad Foundation’s sister organization, Sakha Consulting Wings Private Limited, has created an entirely new female-driven transportation market in India, having provided safe transport to over one million women across Delhi, Jaipur, Kolkata and Indore. To date, it has provided remunerative employment in transport to over 349 women, with many going on to find jobs independently in the market, including Shanti who later worked as a private driver for a visually-impaired woman.

“Women drivers are now finding jobs as cab drivers, chauffeurs employed by organizations and individuals, bus drivers, valets at prestigious institutions, driving instructors for other women and more,” adds Vadera. “By providing safe transport to women, Sakha has also contributed to an increased mobility and safety of women in the cities, including foreign female travellers.”

As the saying goes, it’s going to take a village to get tourism to the point where opportunity and equality are available to all. But luckily, the travel industry is known for its goodwill. G Adventures alone currently has 75 Planeterra projects in 45 countries, and earlier this year it announced an increased commitment to community tourism with the addition of 25 projects in its tours by 2020. This will bring the total number of projects to 100 globally, with 90% of its itineraries visiting a community tourism project that supports women and children, indigenous culture and/or environmental conservation.

“Travel can be transformative and change lives, that’s what we believed at G Adventures years ago,” says Poon Tip. “Travel can be a force for good, if done right. It can create jobs. It can create well-being. It can empower people to live decent and purposeful lives. Business models need to evolve to value social impact as much as they value profit.”