More than a dozen exhibitors and partners took part in last night’s Destination France 2020 tradeshow and award ceremony, hosted by Atout France at the Sheraton Centre in Toronto.

TORONTO — Over 150 tourism professionals and more than a dozen exhibitors and partners took part in last night’s Destination France 2020 tradeshow and award ceremony at the Sheraton Centre.

The Toronto event follows on the heels of other events in Montreal and Quebec City, with the roadshow now moving on to Vancouver for a final stop tonight. 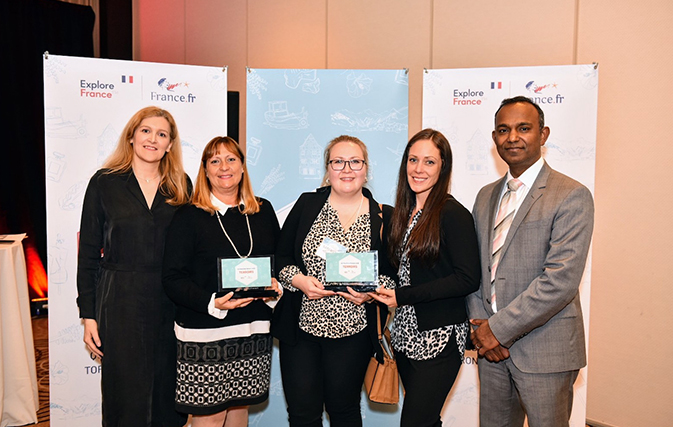 Organized by Atout France, the France Tourism Development Agency, the event highlighted France wealth heritage in cultural landscapes, gastronomy, wine and fine specialties of the land, products with a high profile internationally, under the banner of ‘Terroirs’.

A highlight of the event, Atout France also announced its France Product of the Year Award, recognizing the work of tour operators who showcase and sell innovative and original tours in France.

More news:  A message from Transat’s President and CEO

Agents voted online for one of six itineraries. This year’s Product of the Year winner was the ‘Gourmet Paris Tour’ from Planet France. Company owner Patricia Fargeon accepted the prize, a ‘4 roues sous 1 parapluie’ gastronomic meal in Paris, from Tudor Alexis, Consul of France in Toronto.

To reward agents for their engagement with the contest, there was also a raffle prize for the travel agents who voted online for the Product of the year Award. Stella Maydossian won two vouchers for two people, for lunch or dinner at Restaurant La Bauhinia at the Shangri-La Hotel in Paris, again courtesy of 4 roues sous un parapluie.

Atout France also announced its Partner of the Year Award, going to Club Med. With an ever-growing range of product in the French Alps, and two villages in the French West Indies, Club Med has also partnered with Atout France and retired Olympic skier and world champion Érik Guay to promote the Alps. Samantha Gillingham, Club Med Canada’s Ontario BDM, accepted the award.

Atout France congratulated the winners and thanked travel agents and the tourism industry for their support and efforts in making France a top destination for Canadians. More information and France travel ideas can be found at France.fr.