New York City is a fantastic place to visit not just for the sites, but for the plethora of exciting options available for sports fans. With Porter Escapes, a weekend trip to the Big Apple is simple and surprisingly inexpensive.

Porter Escapes offers hotel and flight packages that are very well priced. They offer a range of hotel options for different budgets in convenient locations. There will be plenty of money left over for sporting events and shopping. For more information on NYC packages with Porter Escapes, visit www.porterescapes.com. 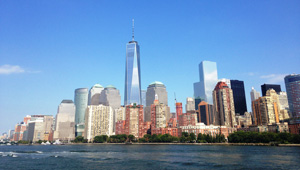 orter Airlines flights to NYC depart from the convenient Billy Bishop Toronto City Airport. Porter provides a free airport shuttle to and from Toronto Union Station. Travellers can arrive at the airport much later than would be required if flying to NYC from Toronto Pearson International Airport.

Porter flights arrive at the Newark Liberty International Airport. Upon arrival, follow the ground transportation signs until you arrive at bus lane number two, towards New York City. From this lane, travellers can catch the Newark Airport Express Bus which stops at the Port Authority Bus Terminal, Bryant Park and Grand Central Station. The cost of a one-way ticket is $16 US per person, with a reduced rate available for seniors who present photo I.D.. Payment is collected once already on the bus and exact change is not required. 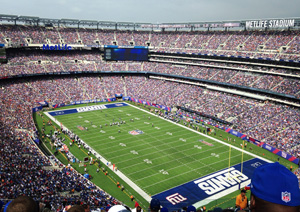 On my NYC sports adventure, I was lucky enough to attend a Yankees game versus the Blue Jays and a New York Giants football game at MetLife Stadium. To get to Yankee Stadium in the Bronx, take the #4 train uptown from Grand Central Station and then the #4 train downtown to get back. To get to MetLife stadium in East Rutherford, New Jersey, take the 351 Meadowlands Express from the Port Authority Bus Terminal. A one-way fare is $5 and the ride takes only 20 minutes. For a 1pm game, the bus will begin loading at 9:30am and runs continuously until 1:30pm. 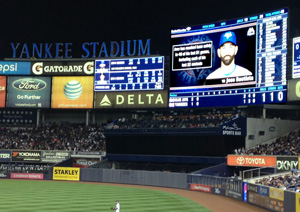 The Giants and the Yankees are only two of the many sporting options available for sports fans visiting NYC. For starters, the New York Jets are another NFL football team that also plays at MetLife Stadium and the New York Mets are another MLB baseball team that plays at Citi Field in Queens. For puckheads, there’s the New York Rangers at Madison Square Garden in Manhattan, the New Jersey Devils playing out of the Prudential Center in Newark, NJ, and the New York Islanders who currently play in Nassau Veterans Memorial Coliseum in Long Island, NY until their move to the Barclays Center in Brooklyn for the start of the 2015-16 season. The Brooklyn Nets NBA basketball team already plays at the Barclays Center, while the New York Knicks excite hoops fans from their home in Madison Square Garden. For those so inclined, the New York Red Bulls MLS soccer team plays home games at Red Bull Arena in Harrison, NJ.

My NYC sports adventure was an utter success that was thrilling and memorable at once. It’s something that I will have to do again one day in the not too distant future. I would love to hear from others about their adventures in the Big Apple, or about the adventure you would love to have. Your memories or plans may just inspire the journeys of other travellers or even myself!