ST. VINCENT & THE GRENADINES — On a recent fam trip sponsored by St. Vincent and the Grenadines Tourism, a select group of media were invited to visit the site of the new Argyle International Airport that is in its final stages of construction and scheduled to open at the end of 2015.

The new airport will offer nonstop jet service from North America, Central and South America, and Europe to St. Vincent and the Grenadines (SVG); a 32-island nation dotting the Lesser Antilles in the Eastern Caribbean Sea, south of Saint Lucia and north of Grenada.

The largest development project ever undertaken in SVG, the US$240 million investment is a crucial part in the evolution of the country’s growing hospitality sector, whose niche markets include sailing, diving, romance and the trendy eco-tourism.

For years government officials have advocated for the importance of an international airport to the country’s development, in particular its tourism, but with St. Vincent’s mountainous terrain, rainforests and an active volcano, bringing this idea to life required years of careful conceptualization and planning.

“Building the airport involved the astounding removal of three mountains, 134 homes, a church, a cemetery and the filling of two valleys,” said Prime Minister Dr. Honourable Ralph Gonsalves during a breakfast meeting with media.

The project was an arduous but essential undertaking that required assistance from the international community, in particular Cuba, Venezuela and Taiwan. “Tall leaps are necessary to get you across the divide. Incremental baby steps won’t do it,” Gonsalves added, and it is this confident disposition that has seen a nation’s wish become reality fostering a bright outlook to the country’s economic growth.

The project broke ground on Aug. 13, 2008, a date symbolically selected as it is the birthday of Fidel Castro, according to Prime Minister Gonsalves. This date was chosen to acknowledge his, and Cuba’s, significant role in bringing this dream to reality. 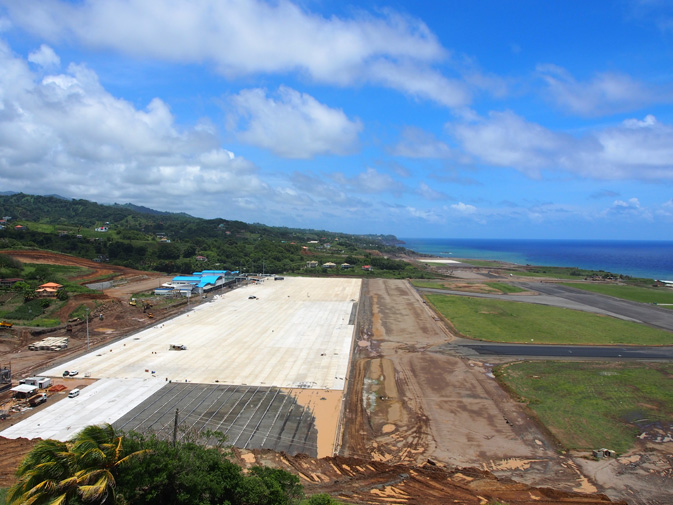 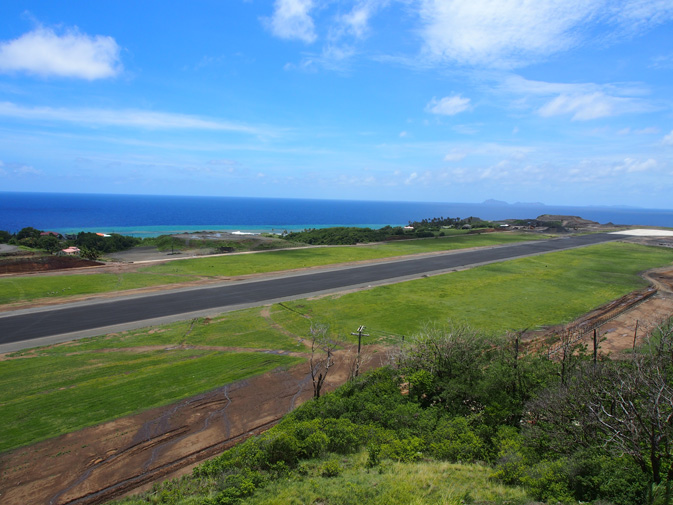 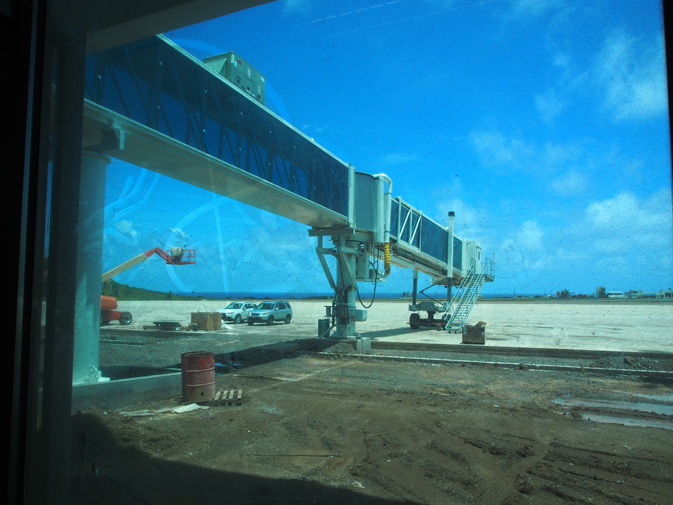 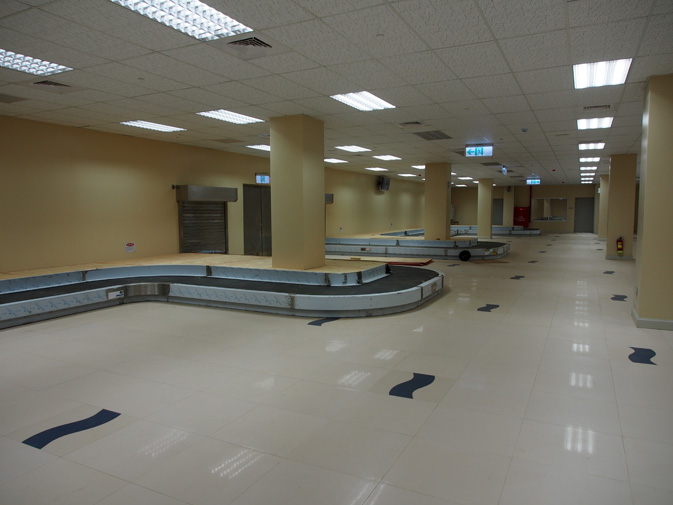 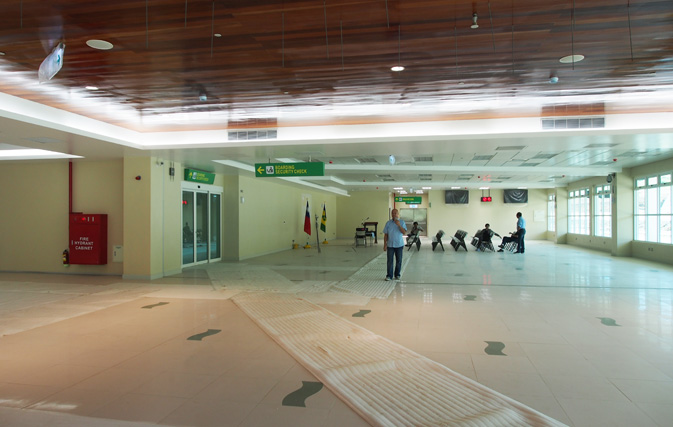 Slated to open later this year, the new passenger terminal building has three floors totalling 129,870 square feet of floor space. The terminal will include a departure lounge, concessions area, a rooftop restaurant and a conference centre facility with a roof garden and parking. A site inspection by the media group revealed significant work, a sign that crews are on their way to getting the airport ready for operation at the end of 2015.

The airport is designed to accommodate up to 800 passengers at peak times, and handle approximately 1.5 million passengers per year, more than five times the number of passengers currently passing through the existing E.T. Joshua Airport.

The new airport will feature two jet bridges; a rarity in Caribbean airports, but an important feature for passengers due to SVG’s annual rainfall. In addition there will be a terminal dedicated to domestic flights and a 9,000-foot runway designed to accommodate commercial jets as large as the B747-400s.

Glen Beache, CEO of the St. Vincent and the Grenadines Tourism Authority, stated that both WestJet and Air Canada are interested in adding SVG to their routes when the new airport is complete, but he expressed that WestJet seemed more promising. As early as the first quarter of 2016, Canadians could be flying direct to SVG, a destination that is currently accessed through Barbados.

The opening of the Argyle International Airport will undoubtedly bring new tourism to SVG, as well as new hotel developers eager to capitalize on the country’s growing tourism. Though names could not be confirmed, Beache did confide that a major Canadian hotel developer will be part of that growth, sure to spark interest in Canadian travellers who want to visit this exotic island destination.

St. Vincent and the Grenadines is comprised of 32 spectacular islands and cays that scatter the tropical seas in a kite’s tail that extends 72 km to the southwest. Unpretentious and relatively unknown, much of its appeal is its seclusion. Its main islands are comprised of St. Vincent, Bequia, Mustique, Young Island, Canouan, Mayreau, The Tobago Cays Marine Park, Union Island, Palm Island and Petit St. Vincent characterized by swaying palm trees, white-sand beaches and pristine waters in blue and turquoise hues. This tropical paradise is sailing heaven and its breathtaking seascapes provide some of the best diving and snorkelling grounds in the world.

While in St. Vincent, media were guests of the 5-star Buccament Bay Resort, an all-inclusive beach property on the island’s southwest coast. The resort is made up of spacious villas beautifully decorated and surrounded by lush green mountains, tropical rainforest, a beautiful white sand beach and sparkling waters.

A highlight of the trip was sailing the picture-perfect Tobago Cays, five uninhabited islands south of Canouan and east of Mayreau, where media were invited to snorkel and swim with sea turtles followed by an overnight stay on the 135-acre Palm Island. This eco-friendly, green certified, pocket of paradise is the ultimate private island escape, nestled amidst five white sand beaches and picture-perfect views that will leave you breathless.

With the opening of the new Argyle International Airport, St. Vincent and the Grenadines will be the must-see destination of 2016. For more information, visit discoversvg.com.