TORONTO — Anyone who was anyone in the late 1800s would’ve been invited to Caroline Astor’s annual ball.

As the unofficial ruler of New York high society, the charismatic socialite and mother of St. Regis founder John Jacob Astor IV would compose a list each year that included the 400 most influential people in the city. This list, which would then be published by The New York Times, also doubled as the exclusive guest list for Astor’s ball, widely known as the social event of the year.

But those lucky enough to be invited faced even more scrutiny upon arrival. At the stroke of midnight, Astor’s head butler would tap the shoulders of the night’s most “intriguing” guests, who would then be ushered into a separate room for an even more exclusive dinner party known as Midnight Supper. These ultra-elite were then treated to an elaborate 10-course meal served by servants in green plush coats. 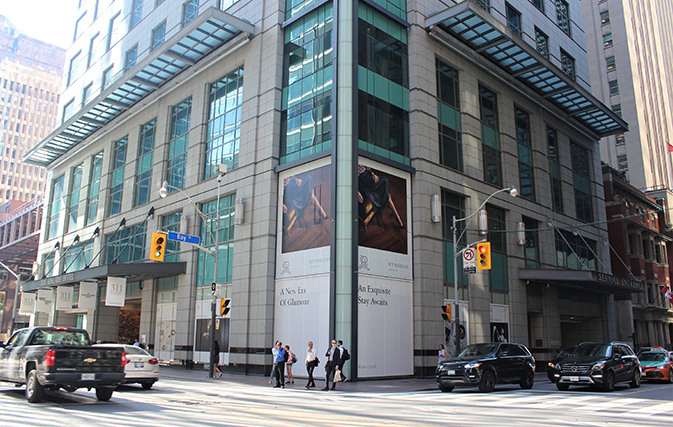 Though this late-night tradition continues today at St. Regis Hotels around the world, the feeling of exclusivity has waned. In fact, at the new St. Regis Toronto, which celebrated its grand opening yesterday with a glitzy ribbon-cutting ceremony attended by Mayor John Tory, the staff and butlers could not have been more welcoming. All are welcome to stay at the new hotel, assuming of course one can afford to.

With standard rooms starting at $650 per night, make no mistake, St. Regis Toronto marks the beginning of a new era of luxury in the city. Formerly the Trump International Hotel and Tower Toronto, the 258-room property, which also includes 124 luxury suites – the most of any luxury hotel in the country – is part of the Marriott International umbrella and marks the St. Regis brand’s debut in Canada. 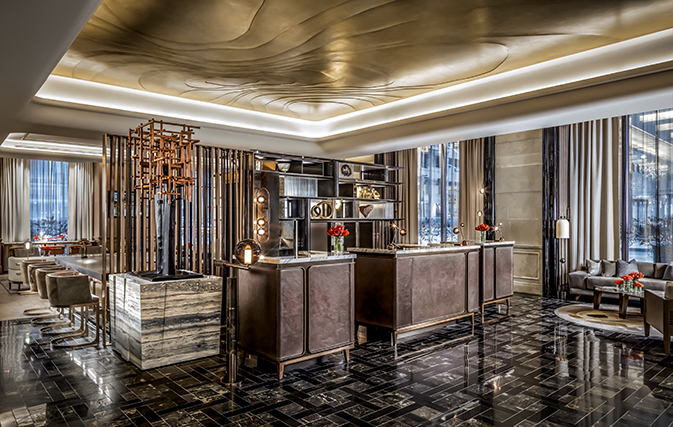 When asked why it has taken so long for the brand to come to Canada, Paul Cahill, Area Vice-President, Eastern Canada, Marriott International, told Travelweek: “Canada’s always been very dynamic and vibrant, but the amount of change that’s been going on in cities like Toronto and Vancouver in the last decade or two is indicative of what’s happening in our industry. We’re seeing the opportunity for a lot more luxury brands. There’s a consumer here who wants luxury brands, we’re convinced of it, which is why we have another one of our most iconic luxury brands here in Toronto.” 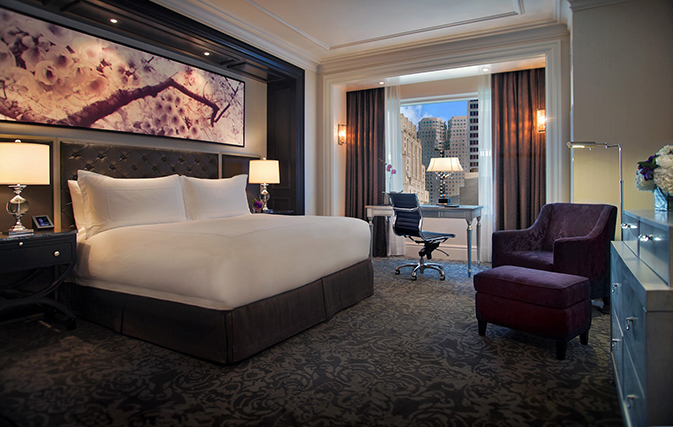 Located at the enviable corner of Bay and Adelaide streets, the 65-storey St. Regis Toronto boasts Toronto’s only ‘grand bar’, LOUIX LOUIX, which opens to the public on Dec. 6 and was designed to resemble the inside of a crystal-edged whiskey glass. Boasting one of the largest dark spirit collections in Canada, the grand bar and restaurant is where guests can enjoy the signature drink Rouge 140, a local spin on the Classic Bloody Mary that’s inspired by the 140 languages spoken in Toronto. 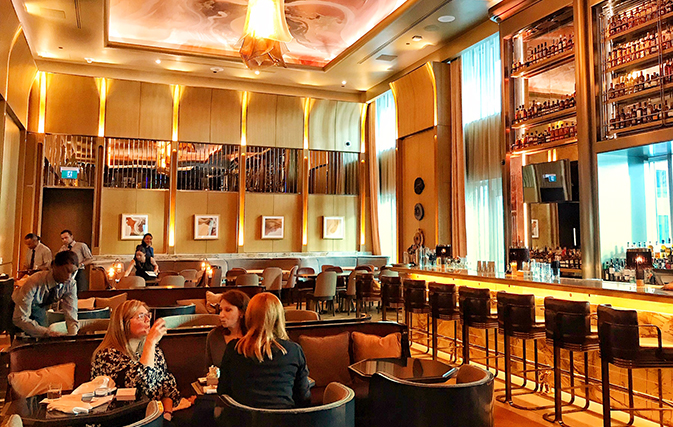 The hotel is also home to the Astor Lounge, two penthouse suites, 12,000 square feet of event space, which includes the St. Regis and Astor Ballrooms that connect via a grand staircase on the 9th and 10th floors, as well as the two-storey Spa at The St. Regis Toronto, featuring an infinity-edge saltwater lap pool, fitness centre and a movement studio for yoga and pilates. 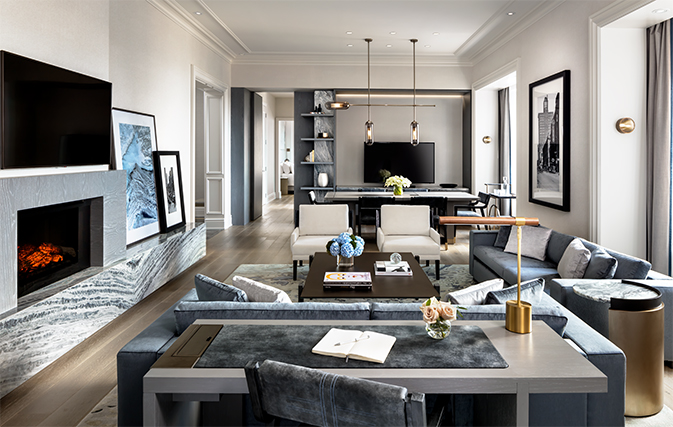 But what truly sets the hotel apart from other high-end hotel chains in Toronto is its signature service, said General Manager Tim Terceira.

“The signature service of St. Regis, such as our butler service, which is unique to the brand, and the provision of that service to all of our guests really puts us in a different space,” he said. “When you think about luxury and what we can do for people’s time, that provides a luxury that most people will find difficult to achieve.” 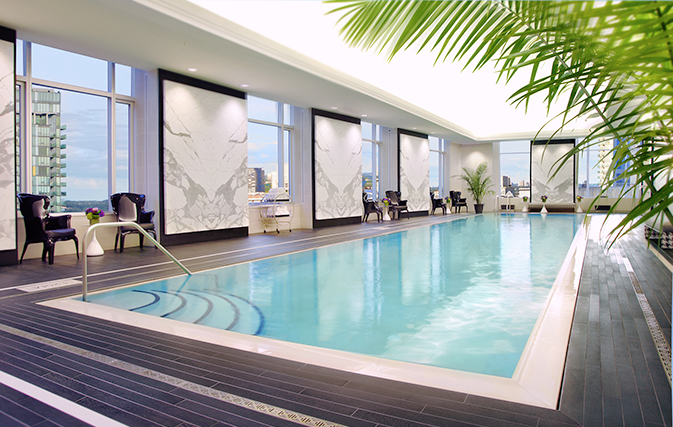 St. Regis’ Butler Service, a standard, around-the-clock service, is both bespoke and anticipatory, added Cahill. “If I’m on business, the service is going to be different and may be more admin-related. But if I’m here with my family, butler service can include unpacking or arranging tours.”

Cahill also noted that the physical layout of the building also makes St. Regis Toronto unique. “Almost 50% of our hotel rooms are suites, which in the luxury space is a great thing.”

Citing the brand’s “great partners” in Toronto and its highly skilled Canadian organization as major contributing factors to its successful Canadian launch, Cahill went so far as to predict further brands and hotels in Canada.

“From a Marriott perspective, we have I believe 20 of our 30 brands in Canada. We would full on expect to see more brands in Toronto,” he said, referencing the W in Montreal as the only W in Canada. “We clearly see that there’s a W customer here in Toronto.”

As for the possibility of more St. Regis properties, Cahill is certainly hopeful: “There’s no doubt in our mind that there are other markets in Canada that we have our eye on for St. Regis.”

And, as Cahill noted, more hotels and more brands is good news for travel agents. “This is another opportunity for agents to book within our Marriott family of brands. As an agent, if I have 30 options of different levels of experience, I think that as a person who is trying to deliver a service to an end user, it’s yet another added benefit.”

Here are some other fun facts about the new St. Regis Toronto: