TORONTO — The Canadian market to Ireland is booming, with the number of Canadian visitors to the Emerald Isle up 60% since 2013. That’s thanks in large part to all the new lift that’s come on board and also thanks to Tourism Ireland’s ongoing efforts to promote Ireland as a year-round destination.

The steady climb reverses what had been a downward slide, back around 2011, says Ireland’s recently appointed Taoiseach, Prime Minister, Leo Varadkar. He’s well-versed in tourism, formerly serving as Minister for Transport, Tourism and Sport. “The airlines [and other tourism partners] helped bring back an environment where tourism is really booming,” said Varadkar yesterday at an industry lunch hosted by Tourism Ireland’s CEO Niall Gibbons and Head of North America, Alison Metcalfe. 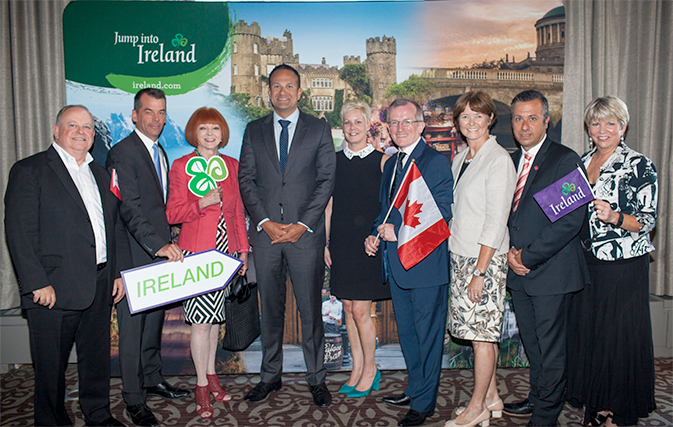 It’s not just Canada sending record numbers to the destination. Overall tourism to Ireland is up 11% worldwide, with a 50% increase from global markets to the island over the past five years.

Last year in particular was very strong, especially from Canada which had a record year for visits to Ireland. Last year’s numbers were up 11% and spend totalled 150 million euros.

Some of the destination’s biggest travel supplier partners here in Canada were on hand at yesterday’s lunch, including Collette, Royal Irish Tours, Air Lingus, the Globus family of brands, Air Canada Vacations and Transat, as well as retail travel organizations including TPI, which has seen a 300% year-over-year increase in Ireland booking volumes.

While happy with strong sales to Ireland, several of the tour operators say they’re looking for alternate airports for their Ireland product, beyond Dublin.

Tour operators are also facing a shortage of accommodation options for their Ireland packages. “It’s becoming a big challenge,” said Luigi Iannello, ACV’s Senior Director, Strategy & Business Development.
Tourism Ireland CEO Niall Gibbons said that by 2020 Ireland will have an additional 5,000 rooms. “So there is a light at the end of the tunnel,” he said.