Talk about a horrible Valentine’s Day. According to the Mirror, two female travellers were put up in a ‘sex hotel’ on Feb. 14 after heavy snowstorms on China’s east coast grounded their Hainan Airlines flight.

The two strangers were scheduled to fly on flight HU7388, departing from Chongqing City to Hangzhou at 8:40 p.m., but were told they would have to wait until 11:10 p.m. to leave due to the storm. When the weather continued to worsen, Hanain Airlines staff informed the passengers their flight would be delayed until 3 p.m. the following day. 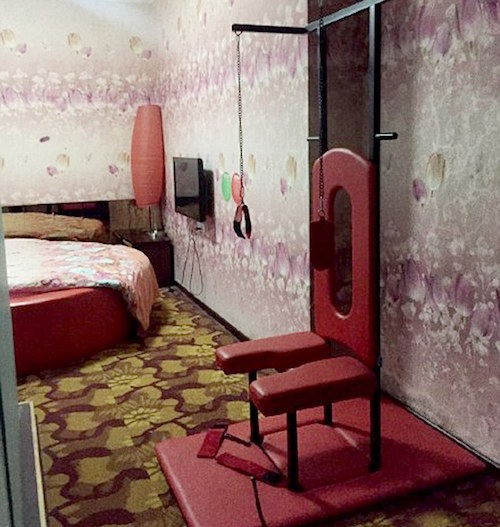 One of the passengers, who later identified herself online at ‘Luobao’, said the airline agreed to put her up in a hotel free of charge, together with another female passenger.

However, Luobao was shocked when she and the other woman were shown a room in the Chongqing sex hotel, which came equipped with a ‘love chair’, chains, and wrist and ankle cuffs.

She shared photographs of the room on social media with the caption: “We are two single girls; is this sex room our Valentine’s gift? I cannot accept the ‘thoughtful’ gesture.”

Hainan Airlines has not responded to the complaint.