The announcement was made by Ontario Premier Doug Ford, who called the new pilot program a “game changer.” 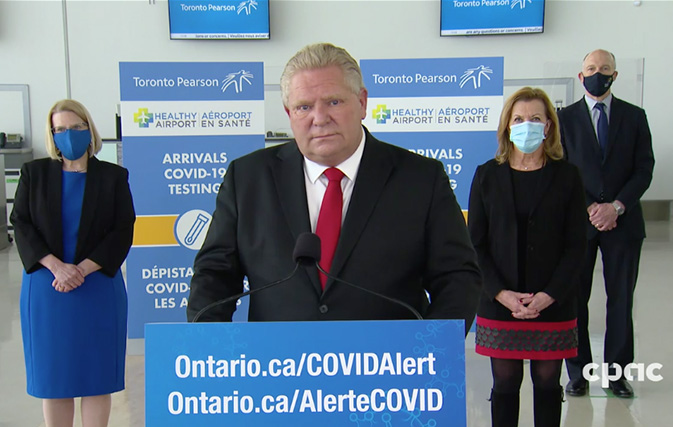 “We have to get these borders under control,” he said at his daily press conference. “Since September, over 1,300 flights in Canada have had potential COVID-19 exposure; in fact, over 31 international flights with COVID-19 have landed in Toronto in the past two weeks alone.

“Before the holidays I made a promise to the people of Ontario that we would do everything in our power to get testing at our airports. Today, we’re delivering on that promise.”

Free and voluntary COVID-19 testing is now available for eligible international travellers arriving at Pearson and staying in Ontario for at least 14 days. Travellers choosing to participate in the pilot will receive a self-administered test that will be supervised by a healthcare provider either in person or by video in a dedicated space in terminals 1 and 3 at Toronto Pearson.

Unlike Alberta’s initiative at Calgary International Airport, launched in October 2020 and which grants a shortened quarantine with a negative result, for Pearson arrivals the 14-day quarantine is still in effect.

However Ontario’s Deputy Premier Christine Elliott confirmed that the next phase of the Pearson pilot, in collaboration with the federal government, would include a modified quarantine period for participants who test negative for COVID-19.

Inbound international travellers can register to participate in the program at torontopearson.com/testing or in person, upon arrival, at the airport. Test results will be reported into Ontario’s lab information system within 48 hours and public health will follow up on all positive tests.

Elliott stressed that all international travellers will continue to be required to follow the mandatory 14-day quarantine after arriving or returning to Ontario regardless if they have a negative or positive test. The pilot is also meant to be a complementary measure to Canada’s new testing requirement.

“This pilot is in addition to the new Government of Canada requirements for travellers coming into Canada to have a negative COVID-19 test, and will act as another layer of protection for our communities,” she said.

Ford added: “While we’re taking these steps, we’re actively working with the federal government to further enhance this program and I hope to have more good news to announce in the coming days. We will continue to work with the Prime Minister and his team on this because right now, we need to stick together. By sticking together and by working together we will get through this.”

As detailed Jan. 6 by Transport Minister Marc Garneau, until Jan. 14 travellers arriving in Canada from the Caribbean and South America will have an extra 24 hours, up to 96 hours pre-arrival to Canada, to get their PCR tests done in-destination. There are also two exempt destinations – Haiti, and Saint Pierre et Miquelon – for which so far no test is required, at least until Jan. 21, due to a lack of testing facilities.

Otherwise the new PCR test rule is now in effect for all arrivals to Canada, and tests for passengers arriving from all destinations except for those outlined above must have been taken within 72 hours pre-arrival.

More details, including a list of all the countries, can be found here.

“As we have been saying for months, non-essential travel continues to be strongly discouraged,” said Garneau on Jan. 6.

Minister of Foreign Affairs François-Philippe Champagne, also at the Jan. 6 briefing, said those who decide to travel during the pandemic may face fewer transportation options for their return to Canada, and/or may have to deal with longer than expected stays in destination.

“As we have said before, this is not a time for leisure travel abroad,” said Champagne. Canadians outside Canada should immediately begin researching places to get PCR tests, he said. “There will be no repatriation flights,” he added.

Minister of Public Safety and Emergency Preparedness Bill Blair said there can be “no excuse for breaking the quarantine order”, and that anyone who breaks the order faces potential fines or prison time.

Garneau added that he says he finds it “unproductive for airlines to encourage travel” at this time. “The situation is very difficult and airlines shouldn’t be encouraging international travel,” he said.

On Nov. 8 Garneau announced a financial assistance package for Canada’s airlines, continent on refunds, however no further details have been made available since that time.

A Canadian government webpage with a list of countries and timelines and more information about the PCR test requirement can be found here. Also, to check listings for PCR test facilities, go to https://travel.gc.ca/travelling/advisories, click on the country followed by that country’s Health tab. Not all destinations have facilities listed.